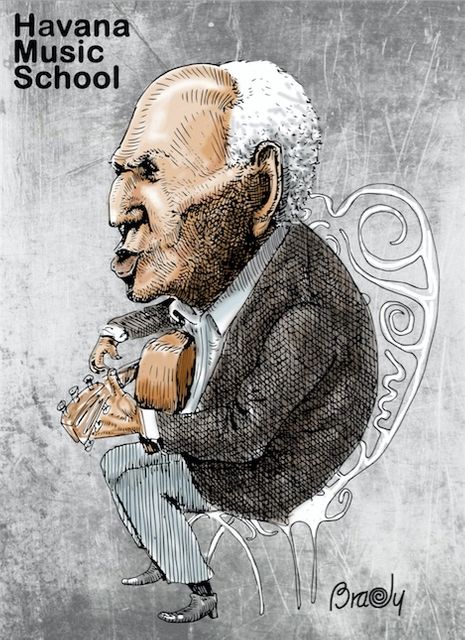 His musical beginnings were in a trio composed also by Cheo Herrera and Ignacio Herrero on guitar and tres respectively. His friendship with Enrique Vinajera led him to be interested in the guitar, an instrument that would learn, most of the time, empirically.

Cesar Portillo de la Luz knew about all the music that occurred at his time. From the tango, guaracha and bolero to jazz and American music in general, it helped him to appreciate the importance of music as an enhancer of the lyrics.

At first, his knowledge was limited to the findings, always very intuitive; he had what he heard, what became, according to himself, a powerful tool.

The influence of jazz and, in general, of American music in the work of Cesar Portillo de la Luz is undeniable. Artists like Glen Miller, Duke Ellington and Stan Kenton left a deep mark on the musical mode to make of Portillo de la Luz.

The genre called feeling, which sought to convey through music the emotions of the composer, was created by him with Nico Rojas, Elena Burke, Aida Diestro and Rosendo Ruiz. Begin, then, a step that would mark forever Cuban music.

One of the most recognized songs of Cesar Portillo de la Luz is Contigo en la distancia, written in 1947: a masterpiece from the point of harmonic, stylistic and compositional point of view.

This has been also one of his most versioned songs. Performers like Fernando Fernandez, Andy Russell, Placido Domingo, Luis Miguel and, among others, The Royal Philharmonic Orchestra of London, have play it countless times.

On the radio, Caesar had several appearances. Realidad y fantasía, with the Conjunto Casino; Canciones del Mañana y Canciones en la Tarde at Radio Progreso, positioned him as a recognized composer in the Cuban scene.

Tú, mi delirio, Realidad y Fantasía or Es nuestra canción, demonstrate the mastery of Cesar Portillo de la Luz to make the listener to submerge, thanks to the harmony and melody of the song, in the feelings that wants to convey the composer.

Nadie me encuentre ese muerto of 1966 marks a move away from the love subjects in the compositions of Cesar Portillo de la Luz. Here he delves into the stories of peasants apparitions, based on a character of the storyteller Onelio Jorge Cardoso. In this group of compositions are songs like Canción a la canción or La hora de todos.

However, all his compositions seek to reflect a world beyond that of the artist. The social context and subjects of interest to their listeners become the driving force behind his work.

On May 4th, 2013 dies Cesar Portillo de la Luz, in his Havana. His death was a painful loss for Cuban music. However, his compositions will resound in the concert halls of the world and will be hummed by future generations who feel, like today, the force that sounds.