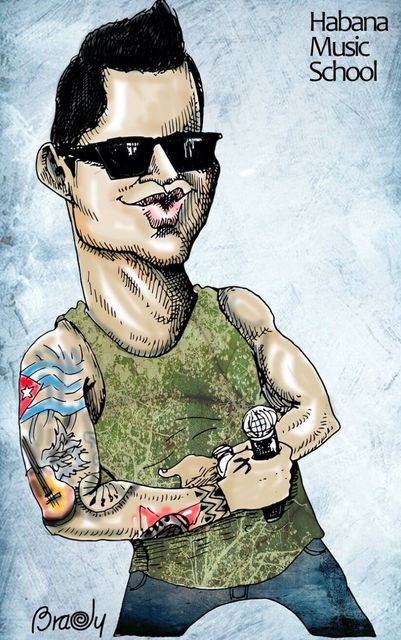 Leonardo Torres Álvarez, popularly known as Leoni Torres, was born in Camagüey on November 24, 1977. His career as a composer, vocalist and producer has led him to be recognized as one of the leading figures of Cuban music today.

Leoni Torres graduated as a refrigeration technician and practiced this profession for a time, until he decided to audition in a local salsa group called Costa Sur, which would be the first place in which he would enter the music professionally. After three months in this group he left her for not being comfortable with the musical genre and worked in the humorous group Los Cariduros. Here he sang ballads, his favorite genre, and wrote the scripts.

Everything comes when you look for it

He was part of the Maravillas de Florida orchestra in 1998, where he recorded the album Vieja, pero se mantiene. It was during his period in this group that he drew the attention of David Calzado for his vocal abilities.

In 2001, it became part of the renowned Charanga Habanera, one of the emblematic Cuban groups of recent times. Here he was until 2008, eight years in which he could share the stage with renowned figures of Cuban music. Among the main hits he recorded with the Charanga Habanera are Gozando a lo cubano and Tiene de Cuba, he has mela’o.

The solo career of Leoni Torres: the simplicity of a voice

After eight years with the Charanga Habanera, Leoni Torres decided to launch his solo career. His scenic projection, his melodious voice and the musical knowledge he had apprehended during the previous years made him quickly achieve great fame.

His first album, released in 2008, was named Bajo la piel. This CD earned him the revelation artist of the year award. In this album there were thirteen songs, perfect mix of current pop, the most emblematic Cuban rhythms and the voice of jazz. His second album was Latiendo followed by Salseando, which he recorded with EGREM.

His single No pierdas el tiempo was used in the campaign for the fight against HIV and made him famous throughout the island.

In 2016, he signed a contract with the production company Magnus Media, in which Marc Anthony is also an artist. This has been a great step in the musical career of the performer who is in the international spotlight.

Te pongo a bailar was the video clip that won the popularity award in the twentieth edition of the Lucas Awards. Under the lead of Yeandro Tamayo Luvin, this clip won him the recognition of all the people who saw in the singer a musician worthy of praise.

The songs of Leoni Torres have been included in the Popular documentary, made by the american Jennifer Paz. In addition, he performs in the soundtrack of the Italo-Cuban film Un loco soñador, as well as in Círculos viciosos, Cuban-Spanish production under the direction of Antonio Hens.