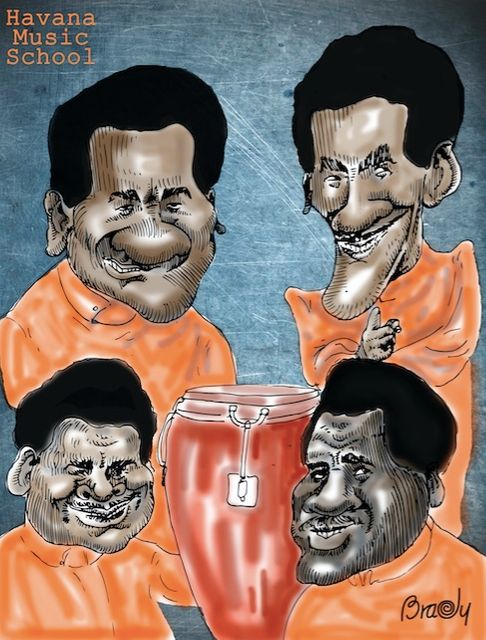 Dancing with Los Papines is one of the most impressive musical and dancing experiences in the Cuban cultural universe and the world.

The group has a musicality and charisma that turn their concerts into real unforgettable shows. The Papines began as a quartet. Due to their renowned expertise in the use of drums, they have been called the kings of Cuban percussion which adds to their extraordinary vocal qualities. Performing popular rhythms like rumba, bolero and son, the band has been since its inception at the top of the Cuban and international music scene.

The birth of a myth

Founded in 1963 by Luis, Jesús, Alfredo and Ricardo Abreu brothers, who became the director, The Papines own their name to the nickname of the latter, affectionately called Papin.

The brothers come from Marianao, a neighborhood in Havana known for its dancing and musical tradition and birthplace of another great artist of the Cuban rumba, Chano Pozo. The Abreu from Marianao had already devoted their history as a family dedicated to music, with a tradition of eleven performers, all in the service of the rumba.

From this lineage come Los Papines, a group that shook the foundations of the musical world when it went on stage. They say that as children they began to play the rumba in pots, crates of fish and, only later, began with the keys, the conga drums and the quintos.

In the ’50s they founded Papín y sus rumberos (Papín and his Rumberos) and, in 1963, they finally adopted the immortal name Los Papines.

The career of The Papines: always rising

The group began performing in cabarets and nightclubs in the city of Havana, such as the famous Tropicana, and soon they scaled the most important stages in Cuba and the world. Their repertoire focuses on rumba, within which they develop expressions like guaguancó, yambú, the jiribillas and the columbia.

They also play rhythms such as boleros and sones, adding to each one their unique sound. Their musical style makes them exotic in places where Afro-Cuban music and especially the rumba are rare. This, coupled with their masterful instrumental and vocal domain, in addition to their artistic charisma, has given them access to the most diverse and important global scenarios, bringing with them the purest Cuban culture.

Their tours take them to many countries among which stand out The United States, Japan, Germany, Russia, France, Canada and Mexico. They have shared the stage with world-class artists like Manteca, Panchito Bejerano, Daria Nasaco, Mongo Santamaria, Tito Puentes, Oreste Vilató and Ray Barreto, among others.

The Papines: a band that fits their time

The band is still active after more than 50 years after its founding. Time settled them blows with the deaths of Ricardo and Alfredo, although the family itself renews the ranks of the group with the entry of Luisito and Alexander, sons of Luis, and Yuliet, daughter of Jesus. All three are musicians of recognized quality and expertise who have managed to incorporate to the band novel sounds in rumba, mixing them with jazz.

If you have found this article interesting, share it on your social networks. And if you have ever seen Los Papines play live, leave us a comment telling us about your experience.