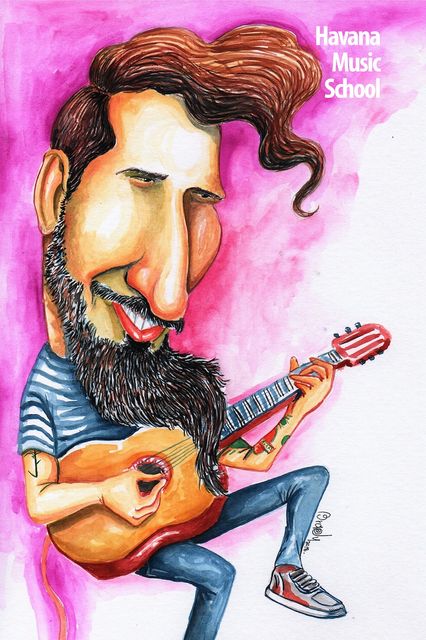 Songwriter and singer Oscar Sánchez is, without a shadow of a doubt, one of the most interesting and innovative proposals within the Cuban Trova nowadays. Born in Holguín, his lyrics, full of irony and double meaning, are a kind of whip with bells that, in addition to making people laugh, invites to think on core aspects of Cuban reality.

A troubadour of his own merit

Born in Holguin in 1986, Oscar Sánchez did not travel the paths of music on his early education, but graduated from the School of Art Instructors José Martí Pérez, in the specialty of Plastic Arts.

However, that did not prevent him from becoming a tresero and a self-taught guitarist to accompany his sharp songs, in which he recognizes a strong influence of William Vivanco, El Guayabero and the poet Omar Pérez on his lyrics, but also of rock and roll music.

In the end, music became his lifestyle and his talent made him obtains the Noel Nicola Creation Scholarship. Thanks to this, he records a CD of a live concert in the A Guitarra Limpia space in the courtyard of Wall 63, named Abrir camino.

He is almost always present in all the Trova events that take place in the country, such as the Pepe Sánchez International Trova Festival in Santiago de Cuba; the Romerías de Mayo, in Holguín or the National Encounter of Young Troubadours Longina, in Santa Clara.

Even so, Oscar Sánchez does not define himself as a troubadour. In his own words, he is a rocker who plays tres, marímbula and guitar to do something that tags halfway between author song and folk punk. As such, his lyrics are acidic, aggressive, lyrical and poetic: it’s all a matter of stage attitude

After moving to Havana, Oscar Sánchez has performed at the Inti Santana’s gathering, Ray Fernández‘s at Diablo Tun tun, and Silvio Alejandro’s at the Cuba Pavilion.

His independent album of 2015 Unknown artist was recorded by Tancelab, and consists of twelve songs that shown his peculiar style and aesthetics with marked social content.

Among them are old known themes by Oscar’s followers, such as “Pepe Mandarria“, “Canción del cacafuaca”, “La amenaza de la NASA”, “El pega pega” and “Balada del junkie”, among others. But a peculiar detail of this album is that poems by Omar Pérez, Evelio Francia and Andrés Pérez are interspersed between the songs.

The following year, the author releases Ojos que te vieron GO, NEVER te verán COMEBACK (2016), where in addition to his own songs he includes songs from other authors such as Pedro Luis Ferrer or Homero and Virgilio Expósito. Marbis Manzanet, clarinetist, and director of Contratiempo also participate in this album.

Even so, Oscar Sánchez continues betting on his peculiar scenic projection, full of theatricality, as a communicative strategy to gain the attention of the public… without losing sight of his work as a jeweler- artisan, which keeps him in touch with the plastic arts.

If you want to know more about the work of our musicians, subscribe to our portal. And help us spread the good Cuban music by sharing this article on your social networks.