Pedro Luis Ferrer – The double meaning in the Cuban song 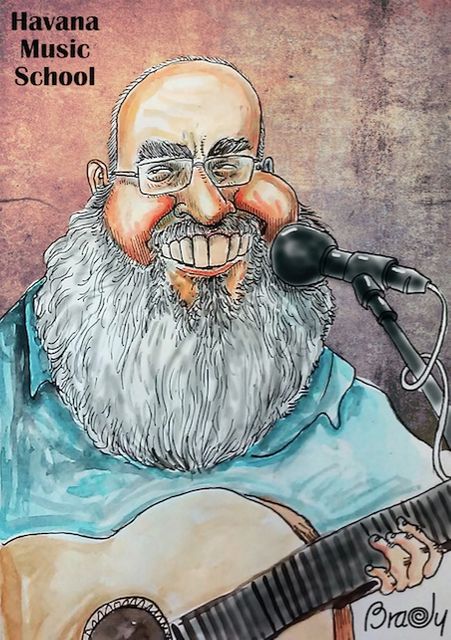 One of the characteristics of Cuban music is his flirtation with humor and double meaning. Since the décima cubana, repentismo, son and guaracha to the most modern timba, is easy to find the picaresque air that characterizes us as sons and daughters of this island: cheerful, talkative, carefree, given a compliment and joke and perhaps a little tykes.

Cuban classic example of this devotion to the revelry is the music of Pedro Luis Ferrer.

Home and studies of a man with good humor

Pedro was born in Yaguajay, Sancti Spiritus, on 17 September 1952. His family was full of popular poets, so from the beginning it was related to the tenth and the music of the Cuban countryside. Although considered himself a self-taught, he studied guitar at the National Art School (ENA).

Before finding it’s own way, Pedro Luis Ferrer was a member of Los Nova, Los Francos and professionally Los Dada. In 1981 he created his own group, closer to their roots and to traditional Cuban rhythms. Pedro Luis acknowledges Carlos Puebla and Silvio Rodriguez as sources of inspiration for his personal style.

The author draws the texts of his songs of everyday life and is projected at different times. Topics remember him as sung and danced as Al que le sirva el sayo, or La vaquita Pijirigua, from time to fashionable Cuba became the artificial insemination of cattle (the sexual implications of the song imagine).

Another hymn that Pedro Luis made us laugh but also think was his I enjoy “hablal” Spanish, who called the Cuban chapter in relation to the abuse of slang in the 80’s from this period his albums Debajo de mi voz y Espuma y Arena

A man who sings what he thinks

Pedro Luis Ferrer sees guaracha not as a kind of carnival that everything you are looking for party and humor, but a rate that is transformed and enriched in time, then, in his own words: “a sense of humor and how to have fun people become steadily”.

It fulfills the precept Marti that humor should be a whip with bells, entertaining but points out the bad and makes you think. His most recent albums are Pedro Luis Ferrer (1999), Rústico (2005), Natural (2006), Tangible (2011) and Final (2014), all produced by his own music studio. Creole picaresque, high lyrical flight of his music and his virtuosity as a guitarist Pedro Luis Ferrer make one of the Cuban musicians whose work is worth knowing and enjoy.

Post your opinion of this author in a comment and share this article with your friends on social networks to find and enjoy the double meaning of his songs.