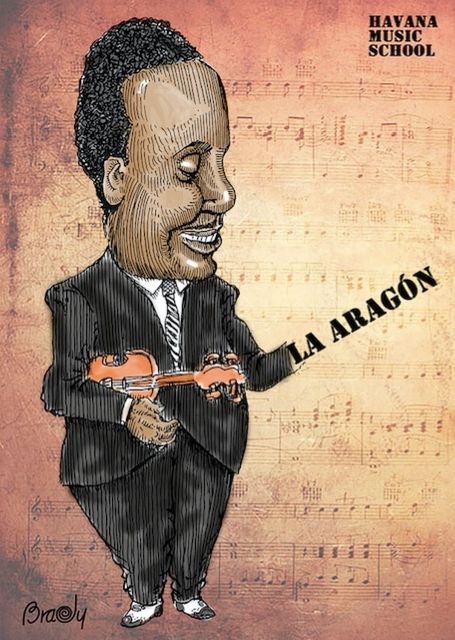 The Orquesta Aragon was founded in 1939 by a carpenter named Orestes Aragon Cantero, in his native Cienfuegos.

La Rítmica 39 (as named at the beginning), it became Rhythmic Aragon, and finally how is known now, being one of the oldest and most emblematic Cuban music orchestras.

Take off of a unique band

They played for the first time in a dance of the gentry, on October 9th, 1939, and the first radio presentations was made at the CMHD of Cienfuegos. Integrated by three violins, and cello, its initial repertoire consisted of danzón, guaracha and other genres of cuban dance music.

In 1948, his creator gave the baton to the young teacher, violinist and singer Rafael Lay. As a whole, the sonority of the Orchestra Aragon aka “La Charanga Eterna”, is based on a mix of traditional African rhythms and Spanish melodies. The flute and violins, absent in other groups, provide a unique style. Each instrument has clearly defined its musical function and complements each other. It is also characterized by the rhythmic and melodic perfection, like an orchestra.

With the triumph of chachachá (rhythm created by Enrique Jorrin in 1953), and presence in the group of flutist Rafael Egües, the Orquesta Aragon became the leading exponent of this genre. It is also considered inspiring the New York mambo with wonderful performances like That Cuban Cha-cha-cha and Riverside Years in collaboration with Pérez Prado and Benny Moré.

In August 1955, hired by the Cristal beer, they definitely installed in Havana to record on Radio Progreso.

From the Cuban stages to the world

Orquesta Aragon in 1965 they became part of the Music Hall and made their first tour to several countries in Europe: Soviet Union, Poland and East Germany, among others. They also participate in the Colombes jazz festival in France and the Royal Festival Hall in England.

From that time they frequent most diverse scenarios, are acclaimed and recognized by the public of the United States, Canada, Italy, Hungary, Finland, Latin America and Africa, among others.

Orquesta Aragon at their 77´s

In 1982, Rafael Lay Junior became head of the group, after the death of his father in an unfortunate accident. He had to also face the departure of some of the most emblematic musicians of the group as singers Pepe Olmos and Felo Bacallao and flutist Richard Egües.

He began to merge various genres, trying to find a new sound without losing the essence of the orchestra. It seemed that his followers would not accept a repertoire that did not compare to those of the golden age of the group, however, the orchestra is still alive and healthy.

It’s members give away at each presentation a fresh and renewed sound. No matter where you are, when the first chords are heard everyone will shout: Orquesta Aragon it’s playing!

If you want to know more about Cuban music, do not forget to subscribe to our site. And please, help us to promote good music sharing this article in your social networks.