The tumbadoras in the Cuban music 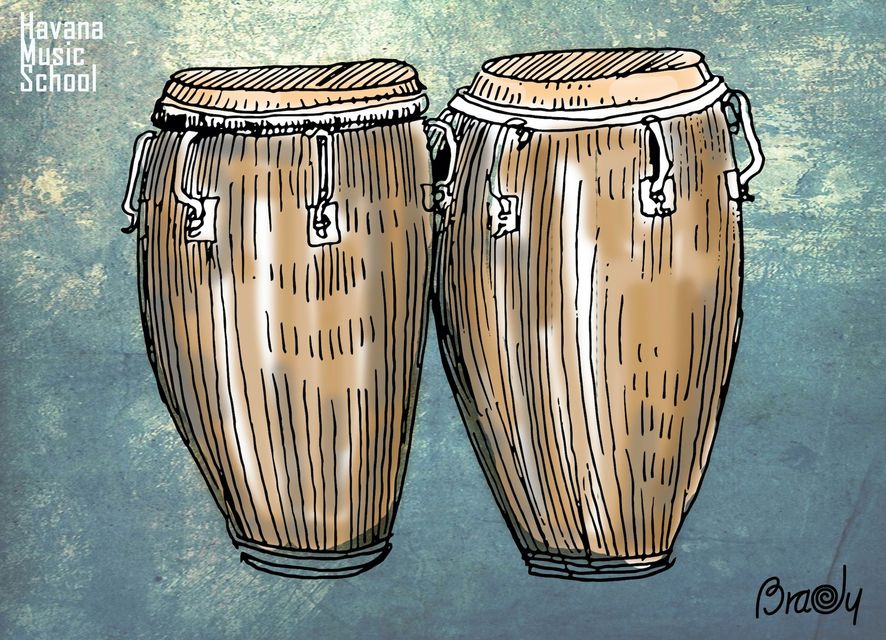 The history of the drums in Cuba goes back to the times before the Spanish conquest.

The aborigines of the island possessed a kind of drum whose sound came from the vibration produced when it percussed on the wood of which it was composed. It was not until the arrival of the slaves, and the license to build musical instruments, that the drums began to use leather and, therefore, gained the peculiar sound that characterises them today.

The need to sing to their gods made the slaves create a variety of drums, each destined for specific rituals. Among the maracas, conga, bongó and pailas, stands out for its sound and variety, the tumbadora.

It is believed that the Congo Drum, our Tumbadora, comes from the Bantú Rule, located in the Congo, region to which its name should be.

What is no doubt is that the tumbadora is an adaptation of the African drums, formed by a hollowed trunk that had a smooth skin at one of its ends. It is not difficult to identify the tumbadora in a popular Cuban orchestra. Its barrel-shaped shape with nails gives it a peculiar characteristic sound.

The tumbadora presents three specific sizes, each one designed to produce different sounds. The larger size is known as Conga bass or simply, tumbadora. The intermediate drum is called Conga and the smaller one is the named Quinto. The latter has a sharp sound that makes it the favorite to perform improvisations, although it is considered as the most complicated of the three to play.

The base rhythms in which the tumbadora interferes are always produced by the first two, while the third is almost always used only to improvise. The well-known rings and metal keys of the tumbadoras were, in fact, incorporated to the instrument by the Cuban conguero Basilio Eliseo Pozo, that played in the All Stars Band, directed by Arsenio Rodriguez. This innovation made it possible to eliminate the warm-up period prior to the start of each concert, which is mandatory in the case of the tumbadora who needed to “warm up the leathers”.

Although this instrument was initially used only for folkloric purposes related to religion, soon its use reached the known street bands, Cuban congas, and, hence, to the popular music orchestras of our island. The tumbadoras are used for the famous guaguancó and the traditional rumbas, which can start in any corner of the island in improvised tumbadoras with wooden boxes that maintain, nevertheless, its typical rhythm.

An instrument in every band

Many of the most recognized Cuban orchestras that include tumbadoras in their repertoire have maintained the traditional function of this instrument when touching the music typical of the Yoruba and Abacuá religions, to mention a few.

The well-known Muñequitos de Matanzas, founded in this city, are one of the Cuban orchestras in which the greatest representation of Afro-Cuban instruments exists. With nearly 14 percussionists and the accompaniment of their own vocalists and dancers, specialized in Afro-Cuban rhythms and ritual dances, this orchestra is renowned for its music throughout the island and the world.

Tata Güines, Mongo Santamaría and José Luis “Changuito” are just some of the names that have given the tumbadora, and the Cuban percussion in general, of international renown and have placed this instrument in the center of Cuban rhythms.

Knowing more about Cuban music and its origins is just a click away. Visit our website and share it on your social networks to spread the word.