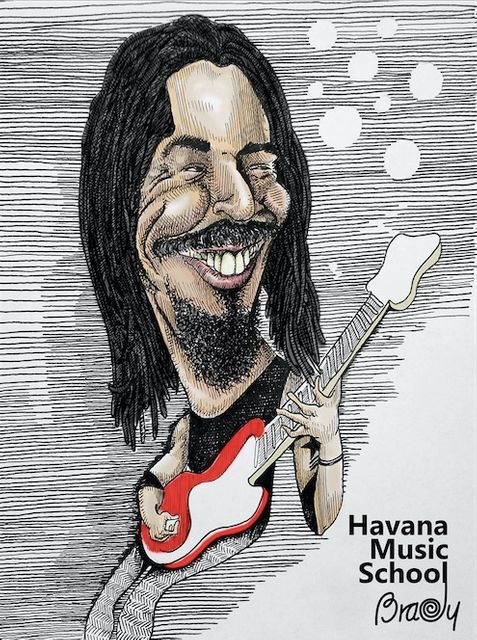 The large musical tradition of Cuba and the quality of their artists, like X Alfonso,  imply that the present-day artists feel their ancestors like a great family.

Of this musical family, the youngest virtuosos take what they take, but without ever forgetting to add you a seal, a tone of its own. Some, however, are more fortunate: Not only they count on that great artistic, common culture to all the Cubans, but also with an inheritance of its own and particular, that he enriches your formation and it serves as guide.

Born in Havana in 1972, X Alfonso, the son of the leaders of Síntesis combines the symphonic rock music with the Afro roots, belonged always to a world of fusion. During his professional tender age, X Alfonso played and composed for the family group. But then he became independent and drew his own carrier. Interested not only in music but in the art in it’s greatest sense, X Alfonso has composed music for ballet companies and movies. Since 2010 he is a Goodwill Ambassador of UNICEF.

X Alfonso, much more than a musician

X Alfonso began his education in Manuel Saumell’s Elementary School. In 1990, after graduating from the National School of Art (ENA), he joined up to the family band Síntesis. There he made several national tours and visited countries like Holland, Venezuela and France. At the same time, he took part in different projects with well-known artists like Santiago Feliú, Amaury Pérez, Carlos Varela y Mi Shell Nge O´Cello. Furthermore, he took the role of keyboard player of the band Estado de Ánimo, directed by  Roberto Carcassés with musicians like Descemer Bueno and Elmer Ferrer.

In 1992 he created along with Iván Latour and Osamu Menéndez, the group Rock Havana, participating in several events of the festivity Jazz Plaza. In 1999 X Alfonso released his first record alone, Mundo Real, in which he composed all songs.

This CD would become the condensed expression to describe the sound of X and was nominated to Grammy Latino in 2001. X Alfonso understands art as a whole, so he does not think it twice when it comes to venturing into other zones of culture. That’s why he has created pieces for dance companies like Danza Abierta, Danza Combinatoria y Transit Also he has composed for movies, as in the film María Antonia of Sergio Giral, that obtained the Coral Reward to the best sound track in the Latin American Film Festival of Havana in 1990, and Havana Blues, that won a Spanish Goya Reward to the best sound track.

This artist quality has been recognized with many prizes. Among them we can quote the Latin American Reward Revelation, granted from the Spanish Music Academy, in order to have aided the approach of the traditional Cubans rhythms to the XXI century and the Grand Prix in the Cubadisco 2005, for Civilización.

For more the last three years, X Alfonso has been the leader of the project of Cuban Art Factory (FAC). This place is currently considered one of the indispensable centers of the musical nights in Havana.