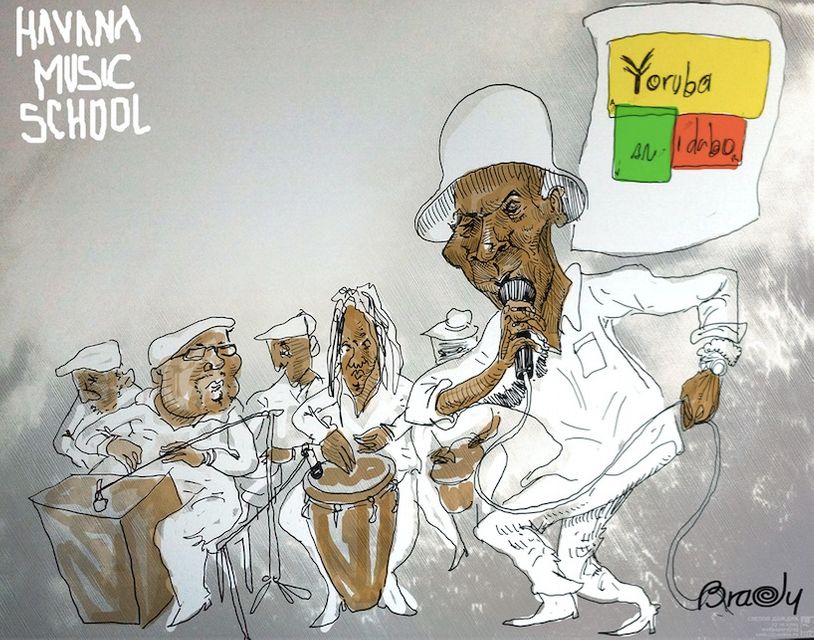 “Working and create, that’s what we lose sleep. I think that we only end with the death. You can see that every Cuban will move his foot when he hears a Cuban conga”. – Geovani del Pino, Director.

Yoruba Andabo was established in 1961 and since then it’s prestige, both in the national and international scene, has never stop increasing. This group from Havana has been named with the identity roots of Cuban nationality. Yoruba: representing the religion of the great African continent that later was integrated into the Cuban culture and Andabo: meaning friend or admirer in language carabalí.

It’s work has imposed a hallmark in the Cuban musical and popular scene, where the main goal is to keep the tradition away from digressions, with a purity of styles, both in song and dance. His music conveys the sensual charm of the rumba, guaguancó, toques de santo (touches of saints), Abakuá and Congolese singings, demonstrating the convergence of races and cultures forged on Cuban soil throughout history.

In this way they have achieved the representation of Cuban physiognomy. In 1986, Yoruba Andabo was invited by the Cuban singer Pablo Milanes to participate in the celebration of the 35th anniversary of the record label EGREM. On that occasion, the famous folk singer Merceditas Valdes, with whom he developed an important work for the Cuban musical legacy, joined that amazing event.

By the year 1994 they became the “Compañía Folklórica Yoruba Andabo”, and carried out professional work in the most important genres of secular religious music, including the Yoruba, Congo, Abakuá, Cuban Rumba and Conga cycles. The group has also developed an educational work through workshops and seminars, teaching popular percussion, folk and popular dances and folk songs at Community level and with the participation of young people.

Yoruba Adabo has brought his art to Colombia, Canada and the United States, among other countries. Their presence is acclaimed in the most important musical and folklore events held in Cuba and elsewhere. His most important performances has been in Percuba in Havana World Music and in the Dance Festival in Toronto. His performance at the Carnegie Hall, in New York City, at the Festival “Voces desde Latinoamérica” (Voices from Latin America) was a great success for the Cuban music.

Yoruba Andabo has shared the stage with prominent artists such as Pablo Milanes, Tata Guines, Joe Arroyo, Celeste Mendoza, Lazaro Ros, Gonzalo Rubalcaba and Niche Group, among others. Currently, Yoruba Andabo is composed of 15 artists: from singers to percussionists and dancers, and in its repertoire there is always all the musical genres that are part of the African origins of Cuban culture.

His album contains more than twenty titles, many of them have received awards not only in Cuba but also abroad: Canada (Juno Awards). His undisputed popular art has been recognized in theaters of different countries, such as Venezuela, Canada, Brazil, Costa Rica, Panama, Colombia, Mexico, Spain, Geneva, Paris, London and Carnegie Hall in New York City.