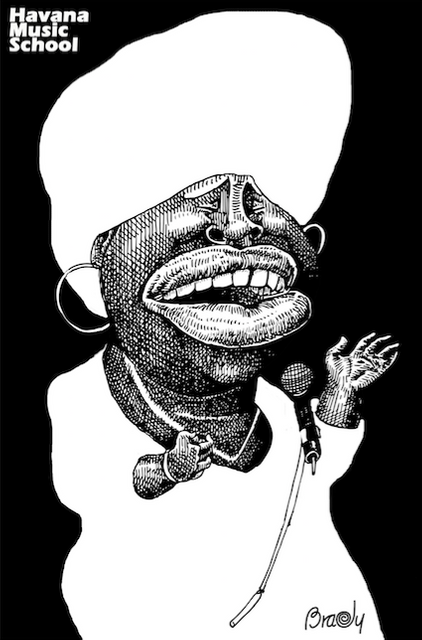 The jazz singer Dayme Arocena is a revelation for those who have a different concept of Cuban music. Her charisma and vocal talent, coupled with the ability to adapt to the most varied trends, have allowed her to be at the forefront of contemporary music. With only 22 years, has shared scene with artists of the stature of the pianist Roberto Fonseca, the rapper Kumar and the Russian Dj Raumskaya.

The beginnings of Dayme Arocena

Since her childhood, her musical concerns have led her to participate in several children’s groups. Before graduating in the specialty of choral direction, she tries instruments like the violin, the piano and the guitar.

In 2010, he participates in tours in Nicaragua and Norway as part of the jazz quintet Sursum Corda. Shortly after his return, she goes deeper into jazz by joining Los Primos Big Band, a group supported by Joaquín Betancourt. That experience inspired her to create her own project, Alami, a jazz band formed by women only.

During Alami’s presentation at the Jazz Plaza 2013 festival, Daymé Arocena befriends saxophonist Jane Bunnet, who invites her to her Maqueque project. She collaborates in the production of a homonymous disc, that later will win the prize Juno 2015 in category of best album of jazz.

Since then, the musical career of Dayme Arocena is on the rise. The turning point is perhaps Havana Cultura, the platform for the promotion of contemporary culture in Cuba, shows great interest in her work and asks her to join Havana Cultura Mix. From this union comes the album Havana Cultura Mix – The Soundclash!, a collaboration between Cuban and foreign musicians. In this project, produced by Dj Gilles Peterson, Daymé sings on three tracks including the hit U Knew Before. The particular sound of U Knew Before runs from the Russian Dj Raumskaya.

The launch takes place in London in 2014, and Dayme Arocena was invited to lend her voice. By decision of Gilles Peterson, she integrated the catalog of the label Brownswood Recordings, where she debuted in 2015 with the EP The Havana Culture Sessions.

In this period, he also has the opportunity to record the album New Era, which starts her solo career. This avant-garde production, whose concept breaks with the traditional image of Cuban music, attracts many people from the United States and Europe, including specialized criticism. Not in vain is named one of the best 50 records of the year by the National Public Radio of the United States (NPR).

To date, Dayme Arocena has lent his voice at events with worldwide impact such as the Festivals Jazz Na Fabrica (Brazil) and Les Voix Humaines (Cuba). Also other London based as the Worldwide Festival, the Peter Barakan Live’s Magic Show and the London Jazz Festival. The Duc des Lombards (France) and St. Pancras Old Church (London) has also be privileged with her voice.