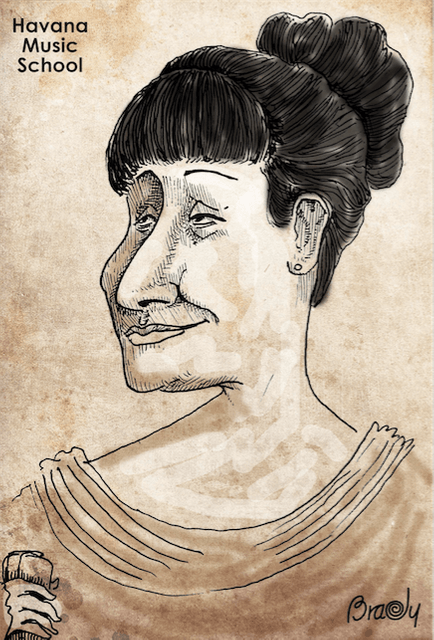 When we talk about the feeling movement in Cuba, the name Moraima Secada always comes up. Her emotional tone, almost pathetic, that so belied with her way to communicate with the public, made this excellent singer a favorite of the regulars of the theater.

Maria Micaela Ramos Secada was born in Santa Clara on September 10, 1930 and a few years later moved to Havana with her parents. Once in the capital, she enters in the popular show The Supreme Court with the song Valencia, a paso doble by Jose Padilla Sanchez, that earned her the first prize in the contest.

Her foray into the world of the song continued in the habitual presentations of Jorge Mazon, initiator of feeling movement on the island, and the Hamel alley next to Angel Diaz. Soon, she becomes part of the Anacaona orchestra, one of the most outstanding women’s groups in Cuba. As a member of that popular group, Moraima travels to Venezuela, Haiti and Santo Domingo, on a tour that would map the novelty of female orchestras, of which Cuba was a pioneer.

The renowned Las D’Aida quartet was the peak moment of the career of Moraima Secada. Aida Diestro joins Elena Burke, the sisters Portuondo (Omara and Haydee) and Moraima Secada in 1952 and forms the famous quartet, that would pass into history as one of the best women’s groups in Cuba.

Aida Diestro was a school for Moraima Secada. In the opinion of the artist, with her she learned to completely dominate her voice, harmony and tuning. Its formation from church songs, combined with her ability to harmonize Cuban and international rhythms, forms a melody that made the viewer audience rose from their seats.

Career as a soloist

After eight years in the quartet, Moraima Secada was accompanied for a while by Los Bravos, recognized group from Santiago de Cuba. In 1962 she becomes part of the Meme Solis Quartet, with whom she had previously worked. Her solo career was marked by participations in the International Song Festival of Varadero and the Adolfo Guzman. In May 1972, she performed in the Amadeo Roldan Theater with the Cuban Orchestra of Modern Music.

In 1979, she traveled to Mexico with Elena Burke and Omara Portuondo and works in the Nostalgias program, in remembrance of their years as a quartet. The singers come together again in 1983 to release Amigas, by Alberto Vera. This popular music jam has been recently completed by Lizt Alfonso, who put on a show where music and dancing just pay tribute to the artists.

Songs like Perdóname conciencia or Mil congojas were popularized by Moraima Secada. She also played themes of Channy Chelacy, with whom she shared her last years. The death of her husband during the attack on the plane of Barbados, plunged her into a perennial sadness that was reflected on her singing.

Moraima Secada dies in La Habana on December 30, 1984, due to a liver disease.