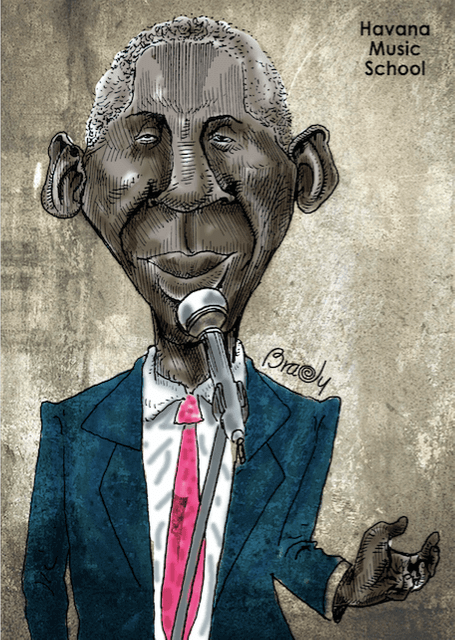 Barbarito Diez, with Aniceto Diaz, Ignacio Piñeiro and Miguel Matamoros, make up a group that came to revolutionize Cuban music making profound changes in the style and harmony of what was being done on the island. They broke the borders that were drawn between musical genres and imposed in the popular taste a new way to make it, suited his generation

Therefore, Barbarito Diez, one of the pioneers in singing danzón, he is remembered as “The Voice of the Danzon” or “The King of Danzón“. Most of his songs were not written as danzones, but he’s adapted and endorsed with the interpretative genius and tender, melodious voice.

He was not limited to this genre, but his work covers traditional boleros and intermediate trova.

Born on December 4, 1909 in Bolondrón, Matanzas, Barbarito Diez moved at the age of 4 to Manati, in the present province of Las Tunas, where he began his fondness for singing.

In 1930, at the request of a friend, she auditioned for Graciano Gomez orchestra, who had a variable format depending on where they were going to play. Barbarito became famous enlivening the Café Vista Alegre, where he met the pianist Antonio María Romeu, who asked him to sing for his orchestra.

Barbarito Diez legend is intimately linked to the Antonio María Romeu’s Orchestra. This proven danzonero was interested in the idea of including singers to instrumental music at that moment.

Maria Romeu had worked with the voices of Antonio Machin and Fernando Collazo, who then launched into international stardom; before finding in the voice of Barbarito what he was looking for. Although between 1937 and 1952 recordings of the group were scarce, their live performances were incessant and worked a lot on the radio.

Two different styles in one voice

Although Barbarito nominally remained at the Antonio María Romeu’s Orchestra, he continued to sing with the trio and quartet Graciano, to the delight of both directors. While in the first Barbarito Diez was crowned as the King of Danzón, with Graciano he is unfolding in the beautiful lyrical of traditional trova and bolero.

This duality made Barbarito began gradually bring their way of interpreting the bolero to the danzón, achieving a perfect fusion. Barbarito remained recording, appearing in dissimilar scenarios Cuba and the world and giving voice to work with prominent Mexican and Puerto Rican composers Agustin Lara or Rafael Hernandez.

Barbarito was one of the Cuban artists selling more albums worldwide: in one year, one of his records sold 30,000 copies, only in Venezuela.

In 1990, a consequence of complications with diabetes, the Voice of the Danzon retired from the stage, carrying EGREM Awards, the Distinction for National Culture and the Felix Varela Order of 1st Grade. Five years later, Cuban music has lost one of its greatest singers, at the advanced age of 86 years.