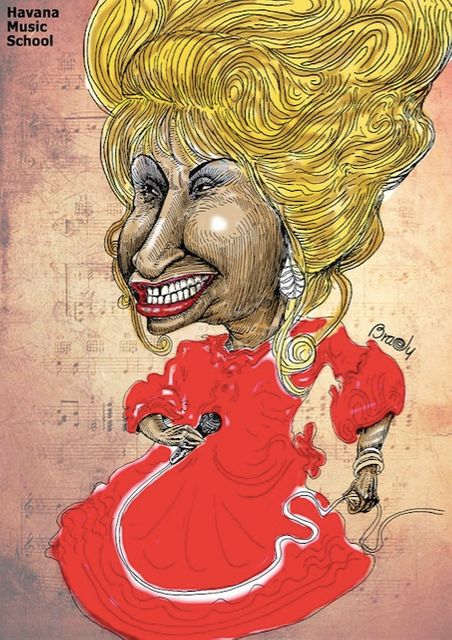 Celia Cruz´s prolific career earned her the name of Queen of Salsa, appellative who she honors throughout her life.

At the ahout of Azúcar! Celia has made dance a whole continent for decades and became a musical symbol.

How a queen is born

Úrsula Hilaria Celia Caridad de la Santísima Trinidad Cruz Alfonso, known by all as Celia Cruz, was born in Havana on October 21st, 1925. Raised in the neighborhood of Santos Suarez, she grew up with her three brothers and eleven cousins that she cooed and sang.

Her voice was inherited from his mother, who could recognize the little Celia talent for music. From an early age, Celia sang for tourists and sat outside the cabarets to watch the dances and sing the melodies.

Although she began studying teaching, her love for music was so great that she decided to quit, entering the National Conservatory of Music. She won several prizes at musical contests radio programs, as the Supreme Court of the Air, an appears with orchestras such as the Gloria Matancera and the Sonora Caracas. When she began to work in the cabaret Tropicana she meets Rogelio Martinez, director of the renowned Sonora Matancera, who invited her to join the group.

Her journey through the Sonora Matancera

Celia Cruz replaced Myrta Silva as the official singer of the orchestra, a moment that would mark his career and boost, as ever, the Sonora Matancera. During the fifties, Celia shines in Cuban scenarios with rhythms as well-known as Cao Cao Mani Picao and Burundanga, which would merit a gold disc in 1957.

Amid artists like Benny Moré, Miguel Matamoros and Compay Segundo, Celia Cruz won for her the name of “La Guarachera de Cuba”, for her prodigious voice and stage combination that would characterize all his life.

Celia Cruz in the United States

In 1960, when her group was touring Mexico, Celia decided not to return to Cuba and temporarily installed in that country. After a brief stay, she goes to the United States where she signed a contract with the Hollywood Palladium and married Pedro Knight, first trumpeter of the Sonora Matancera.

With her husband as manager, Celia began his solo career and recorded the first album with Tito Puente, famed percussionist with which would have 8 discs. Her presentation at Yankee Stadium with renowned Latin musicians marked the rise of a musical genre that she would star: the salsa.

The image of Celia Cruz is famous throughout the world. Her extravagant wigs, elegant dresses and high heels colors make it an emblem of Latin American music and specifically Cuban. For his album La Negra Tiene Tumbao (2001), she received the Grammy for best salsa album.

In 2002 she was diagnosed with a brain tumor that, despite the operation which he underwent, was hopeless. In March 2003, at the Jackie Gleason in Miami, she was honored for his career. Celia Cruz died on July 16th, 2003, and her remains were buried in New York, after being farewell by all who admired her.