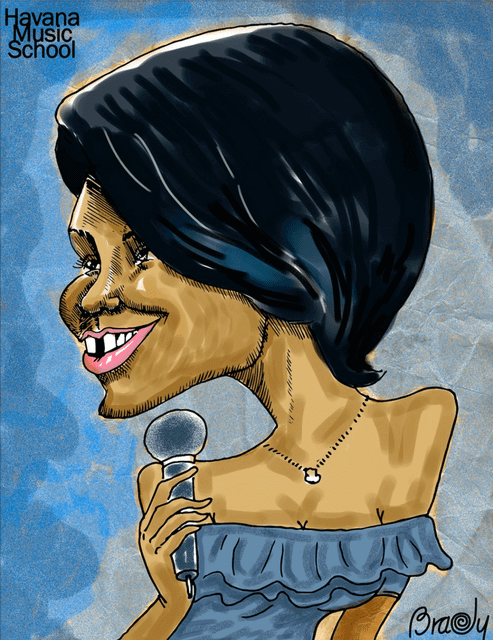 According to the specialized critic, on stage Laritza Bacallao resembles an erupting volcano. However, far from him, is a simple, jovial young distant from the traditional image of the great divas.

And is that the singer with only 33 years of age and 22 of career has become one of the most respected musical figures in Cuba. Her excellent voice, accurate interpretation, magnificent repertoire and infinite taste for what she does make this young Cuban diva a revelation of music worldwide.

The beginnings of a singer

“Like father, like son”, you could say of this talented woman. She recognizes without qualms that her musical adventure began with almost no idea of ​​what she was doing and how proud she is of carrying the genes of her father and grandfather. And it is that Ernesto Bacallao and Felo Bacallao have been two of the greatest singers of the legendary Orquesta Aragón. Born in Havana, Laritza says that music has accompanied her since she was in her mother’s womb.

Her life was as normal as of any child, only that most of the time she dedicates to study. She always worked very hard and start singing at a very young age. For her, it was an unforgettable experience when at the age of 8 she appeared on the radio station Radio Progreso with the Sensación y Aragón orchestras.

These are some of the impressions of the singer about her first steps in this difficult race. Even when she had as a child the dream to become dancer, she ended up being a singer. She graduates of the Elementary Level of Choral Direction and Middle Level of Accompanying Pianist.

Laritza Bacallao, the young diva for Cuba and the world

The media consider her as the most outstanding artist of traditional and contemporary music in Cuba. Ovacionada by diverse publics, it surprises to all by its powerful and well timbrada voice loaded with inflections and modulations, that remember to the most exalted divas graduated of the North American school.

They have even wanted to name it as the Rihanna of Cuba. But she claims that, “although she would love to share the stage with this famous singer, she only considers herself the Laritza of Cuba. He does not need more. “

He has had the opportunity to participate in several editions of the “Festival Boleros de Oro” and has intervened in the tributes to the famous Cuban singer Benny Moré. In 2012 and 2013 he won the Popularity Prize “Between you and me” and the Lucas Prize 2014 in the category of Best Video, for the video “Que suenen los tambores”.

Internationally, she has been the only Cuban nominee for the Univision Channel’s Youth Awards in the United States and the first to participate in the Bemai Awards. He has also toured Japan, Venezuela, Germany and Italy.

Laritza Bacallao intends to continue singing and would love to share the stage with Pablo Milanés, Olga Tañón, Marc Anthony or Barbra Streisand. And he has proposed to convey a lot of optimism through music. It’s like telling everyone to lift their spirits, to feel happy to be alive and to go out and live. And the biggest challenge that lies ahead is to stay in the public’s preference.