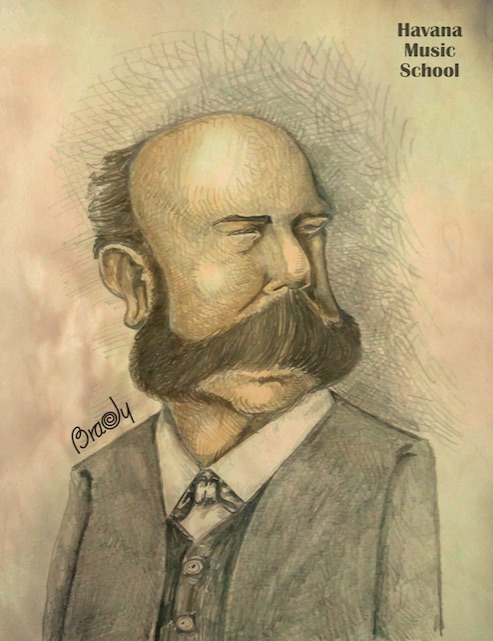 The contradanza was one of the genres that, over the centuries, has given an entirely Cuban music style. The origin of the contradanza on the island is discussed, as could have been introduced by the European educated elite sectors or from other parts of America.

The truth is that it style in Cuba, throughout the nineteenth century, took the roots of a mark away from all molds by Manuel Saumell Robredo.

Manuel Saumell was the first composer to diversify the stylistic elements within this genre, thanks to it he will be considered the father of the contradanza in Cuba.

Although his writing is entirely classical music, it can be found the first nationalist tendencies. Manuel Saumell marked the passage from classicism to romanticism, opening the quarry of a national style which, in turn, incorporates trends that dominated in Europe.

Havana of 1810 was the birthplace of many important composers, pianists and music teachers. It is at this time that was born on July 17th, 1817 Manuel Saumell. Coming from a poor family, he had to take his first steps in music as an autodidact, but that did not stop him to start composing at 15 or 16 years. His vocation was stimulated by musician and teacher  Louis Moreau Gotsacchalk, whom he knew and admired throughout his life.

At 22 he wrote an opera inspired by the novel Antonelli Echevarria, but unfortunately there is no documentary proof of their raid. Yes his most important works are preserved, as “Los ojos de Pepa”, “Ayes del Alma”, “Luisiana” and “El Somatén”, the latter with a strong political load rejection events “Conspiración de la escalera” (Conspiracy of the Stairs).

During his years as student he attended lessons with Juan Federico Edelman and Maurice Pyke who taught him instrumentation, counterpoint, harmony and fugue. This knowledge was the essence of the stamp that Manuel Saumell will leave in Cuban music. Thus the musician struck a perfect balance between the European classical tradition and its own nationality.

Following the structure of the traditional contradanza, the Cuban pianist instead of repeating the first eight bars of each part, he usually marked sixteen complete bars for the second half. Regardless of the classical origins of the first section, the second contains the native particularity.

The famous Cuban composer obtains not only through the use of the basic figures of the indigenous music but also by the wide variety of rhythmic combinations. These contributions transformed it a genre that had been convicted solely for the ballrooms.

The recognition achieved in life made it named presidents of the music section of the  Santa Cecilia Philharmonic, in Havana. Ramon Pinto close friend and Spanish pianist José Miró, he convened together they founded the Literary Artistic Lyceum of Havana.

Unfortunately, he found death at age 53, August 14th, 1870, being married to Concepcion Amegui, and leaving three sons and great ideas about Cuban music.