Ray Fernandez – From the kitchen to the trova 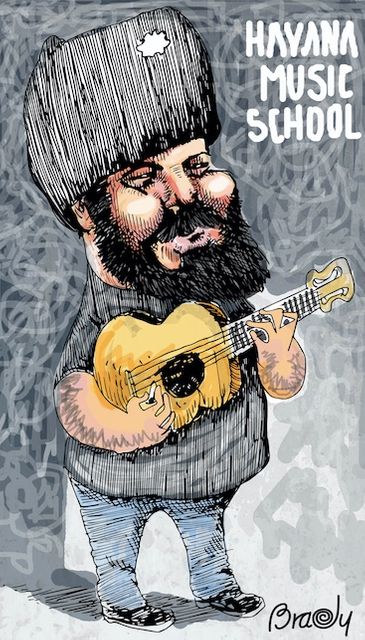 Ray Fernandez is one of the rare cases in which the artist became famous after his songs.

It seems impossible, but it was like that. At the beginning of 2000, his song “La Yuca” was sang by many (…lucha tu yuca, taíno, lucha tu yuca…), and became very famous, but few knew about his author.

Due to it’s biting humor and strong social critic many attributed it to Frank Delgado. So this was the first success of the troubadour from Alamar, a suburb of the Cuban capital. Ray Fernandez became part of the so-called fifth generation of the “Nueva Trova”, Ray Fernandez became a critic of his time, with his guitar as a rifle and always accompanied by his good humor.

The beginnings of Ray Fernandez

Ray Fernandez, chef training, began his creative work writing poems, or “attempts of poems” as he describes them. It was one of his friends who gave him the idea of creating music with these texts, using his clear and deep voice.

That was how Ray Fernandez “met” the guitar and began to compose. Following an incident for which he lost his job as a chef, Ray Fernandez began to make a living with his guitar on his shoulder, singing a little of everything in the Havana Malecón as a troubadour, bartering his songs for a couple of dollars.

At the same time, he offers his first performances at the House of Culture in Alamar. He met the troubadour Eduardo Sosa during a May Festival, coinciding again with him and Vladimir Zamora shortly afterwards. And so they began their gigs in clubs and events organized by the magazine El Caiman Barbudo and the Longina festival at the Spanish Cultural Center. Amid these wanderings, Ray Fernandez record a demo entitled Entre la piedra y el sueño,  (“Between the stone and the dream”), with live material recorded as part of the Verdadero Complot project.

A troubadour, rather than recognized, that must be recognized

In 2009, the artistic career of Ray Fernandez was consolidated with two important events: the recording of his first album with the EGREM record company and his first gig at the Diablo TunTun, at “Casa de la Música Miramar”. His album titled “Paciencia” (Patience), was well received by the audience and critics. He was among the nominees to Cubadisco award in the category of Trova-fusion. They stressed songs as “El Gerente” (The Manager), “Tenerte un año”, “Tentaciones” (Temptations) or the song that gave the album its name: “Paciencia” (Patience). After appearing in several clubs, it was the “Casa de la Música de Miramar” who gave him a vote of confidence. Ray Fernandez gig every thursday afternoon at the Diablo Tun Tun has been consolidated over the years, and is currently one of the best Havana shows.

Ray Fernandez is an exponent of critical and intelligent song, which has always characterized the movement of the “Nueva Trova”. Topics such as the aforementioned “La Yuca”, “El obrero”, “El gerente”, “Matarife” or “Mamá, ando contento” criticism of the reality in which the creative life of the troubadour develops craved social chronicles.

Despite its acidic and scathing prose, the good humor and optimism are a very important part of his repertoire. Perhaps that’s why his popularity has grown and its success is already an undeniable fact. Although he has not been favored by the media, even sometimes censored, Cuban-blooded recognize his voice to an artist who is not afraid to tell the truth. Because that’s the way when a Cuban decides to play guitar Ray’s way.

If you love the music of this artist, share this article on your social networks so your friends will know also Ray Fernandez’s work. And do not forget to leave a comment about this singer, in favour of or against him. Because your opinion counts and musicians love controversy.