Silvio Rodríguez – The voice of the Cuban nueva trova 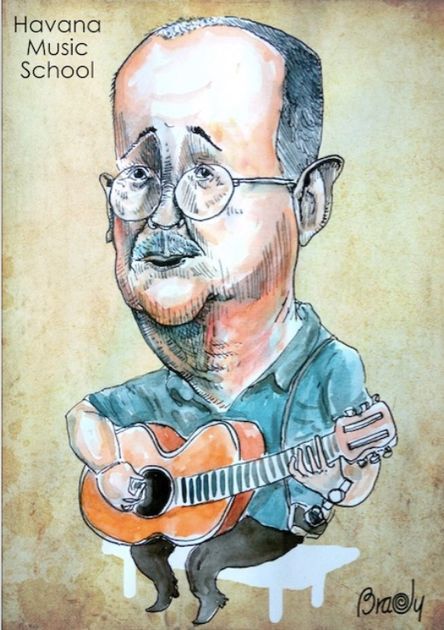 When we talk about the musical revolution in Cuba after 59, we should always mention the Nueva Trova movement. Within this musical phenomenon stands out the singer and songwriter Silvio Rodriguez, one of the most outstanding and loved by the public Cuban musicians.

The seed of the troubadour movement in Cuba

Silvio Rodriguez Domínguez was born in San Antonio de los Baños, in 1946. From an early age he stood out for his music, his interest in poetry and his writing. Silvio’s family was a typical peasant family: from his mother he inherited the musical talent that ran in the family.

When he was still very young, he competed in Looking for a star, a musical program of the CMQ station. With only 5 years of age, Silvio moved with his family to Havana, for work reasons of the father who was dedicated to the upholstery. His sister María de los Ángeles was only one year old.

Once in Havana, the child continued to perform in musical contests and on the radio. At the age of 7, he was enrolled at the La Milagrosa Conservatory where he did the preparatory and first piano courses in just six months, before deciding to leave school.

The youth of Silvio Rodriguez

Silvio worked during his youth in the magazine Mella, in which he would befriend Víctor Casaus and Luis Rogelio Nogueras, important figures in Cuban literature. Here he would work as a draftsman and get to know Lazaro Fundora, who would start him on the guitar, an instrument that would mark his life forever.

The artistic studies of Silvio Rodríguez continued when he enrolled in the San Alejandro Conservatory as a student of painting and, in addition, he resumed his piano lessons in 1963. By 1964, the young man had to join the mandatory military service, where he would compose his first songs and he would continue his apprenticeship as a guitarist. During his time in the army, he composed his songs La cascada, Nuestra ciudad, Sed y Te vas.

At the beginning of the Cuban revolution, he worked as an educator in the Conrado Benitez brigade, and then devoted himself completely to music. He was part of the ICAIC Sound Experimentation Group with figures such as Leo Brouwer, one of the most outstanding composers and musicians in the country.

The ICAIC Sound Experimentation Group was dedicated to the preparation of young musicians and novice bands of the time. In this place Silvio would meet other greats of Cuban music such as Sergio Vitier, Pablo Menéndez, Sara González, Ana Besa, Eduardo Ramos and many others.

A life dedicated to create

In 1969, due to some comments made about the popular English band The Beatles, Silvio was fired from his work on television. At this moment, he decides to undertake a trip by sea on board the trawler Playa Girón. In a journey that would last 4 months, Silvio composed a total of sixty-two songs, which he would record in three cassettes of 90 minutes each. From here arose one of the best known songs of Silvio: Ojalá. In addition, he composed in this trip Resumen de noticias, Fábula de Océano, Cuando digo futuro, Hoy no quiero estar lejos de la casa y el árbol, Cleopatra and Playa Girón, among others.

Silvio’s first record was made in the studio of the EGREM Orchestra. His first album was produced by Frank Fernández, a Cuban pianist and composer considered one of the island’s great musicians. His music took him to different countries in Europe and America, together with the Irakere, Afrocuba Orchestra and Diákara groups. In 1978 he would release his second album, Al final de este viaje, only with acoustic instruments. This album would have songs as recognised as La era está pariendo un corazón, Canción del elegido y Ojalá.

Silvio Rodríguez was thereafter one of the most recognised figures on national stages and one of the most beloved representatives of the island’s music abroad. In 1997 he was chosen as an Unesco artist for peace and has been recognised as the best Spanish-American singer-songwriter along with Joan Manuel Serrat.

The music of Silvio Rodriguez

The different albums released by the singer-songwriter have been an example of his enormous musical talent, which is evident in the acceptance of the public. Among the most outstanding are Días y Flores (of the year 1975), Mujeres (released in 1978), Al final de este viaje (of 1978), Rabo de nube (of 1980) y Unicornio (of the year 1982), to mention only some of the over 20 albums he had recorded.

Close friend of Noel Nicola, Pablo Milanés and Vicente Feliú, great exponents of the Nueva Trova movement, Silvio Rodríguez would become part of the voice of a generation that would grow with the revolution. The beginnings of the New Cuban trova would be marked by the compositions of Silvio Fusil contra fusil and La era está pariendo un corazón. This last song, one of the most recognized within the singer-songwriter’s repertoire, was first performed by Omara Portuondo, whom Silvio Rodriguez met on his television program Meanwhile.

In 1982, on his album Unicornio (in which the song of the same name stands out), Silvio would be accompanied for the first by an orchestra. It will be this album that would gain international fame, especially in Latin American countries. For 1988, the album ¡Oh, melancolía!, a beautiful musical work, would include the song Yo soy de donde hay un río, which would be the song of a homonymous Spanish film.

Without a doubt, Silvio Rodriguez has won the admiration of his listeners with his soft voice, his unique melodies and his lyrics full of emotion. His presentations in theaters and neighborhoods of Cuba are always characterized by enormous attendance. If it’s Cuban music, it’s one of the great ones that can not be heard. Silvio Rodriguez is still a reference of the best of the Island, as far as the musical stage is concerned.

If you liked this article, do not forget to share it on your social networks. Keep visiting our page if you want to learn more about the best and most current of Cuban music.