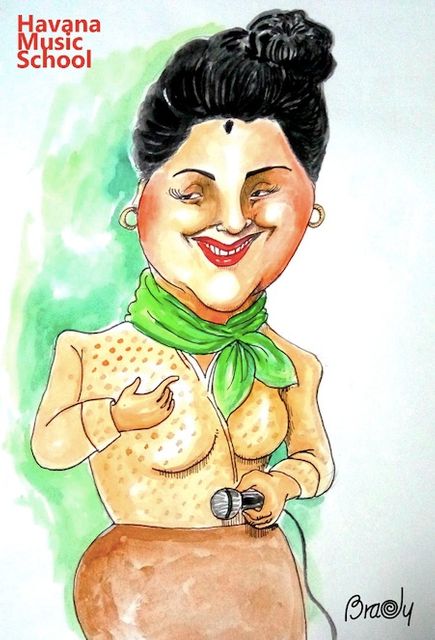 Daughter of the marriage of a mulatto and a white woman, Rita Montaner was always linked both to the music of the great halls as the popular music that flooded the streets of Guanabacoa. Since childhood she showed love for music, so her parents decided, in 1910, send her to the Peyrellade Conservatory.

She graduated with 17 years in singing, piano, harmony and composition. Upon graduation, she obtains the gold medal in the Sixth Year Contest with a concert piano in G minor of Mendelsohn. Interestingly, one of his most popular countrymen musicians, Ernesto Lecuona, also participated in that contest.

The new voice of the Cuban lyrical theater

In 1922 Rita Montaner was invited by Eduardo Sanchez Fuentes, outstanding Cuban composer, to participate in that year´s season of the Havana lyric theater. With the presentation of two dances for piano by Jorge Anckerman,

Señorita and Reinando y llorando, Rita Montaner quickly won the audience admiration that filled the theater. Her elegant bearing, her formidable smile and the powerful voice that characterized her, could not but draw applauses. Montaner´s subsequent performances in Havana theaters were characterized by the presentation of pieces from the most renowned composers of that time such as Lecuona, Sanchez de Fuentes or Roig Anckerman.

With the opening of a new season of zarzuelas, Rita was finally enshrined in Cuban music thanks to the formidable partitures of Grenet and Lecuona. The interpretation of Ay, Mama Ines Rita Montaner, dressed as a black guy coachman, acquired national fame that would pass quickly across the international scene.

Such was the love of the public for that particular song that Rita usually had to sing it several times during her presentations.

The opening of the radio in Cuba in 1922 received the Montaner with two popular songs of José Mauri and Sanchez de Fuentes. Her role as Lengualisa the gossipy, could caricaturing President Grau with a masterful humor, character that would later was taken to the big screen by the same Rita Montaner.

From 1926 she began to carry out world tours, performing in outstanding scenery and excelling wherever she was. United States, Paris, London, Spain, Argentina, Mexico and Venezuela were among the countries that hosted that famous Cuban artist. In 1933 she makes her film debut in a Mexican movie named La noche del pecado.  This would be the beginning of a long journey in the world of cinema, with films such as Sucedió en La Habana (1938), El romance del Palmar (1939), Romance Musical (1942) and La Única (1952).

Rita Montaner excelled by her ability to blend into her voice spontaneity, sincerity and vocal range. Worth to remember is her interpretation of El Manisero, masterfully linking elements of classical music with the popular street cries. Regrettably, this artist dies on April 17th, 1958, victim of cancer.

If you found this article informative and love the music of this Cuban star, share it on your social networks. And if you want to know more about Cuban music, subscribe to our website.