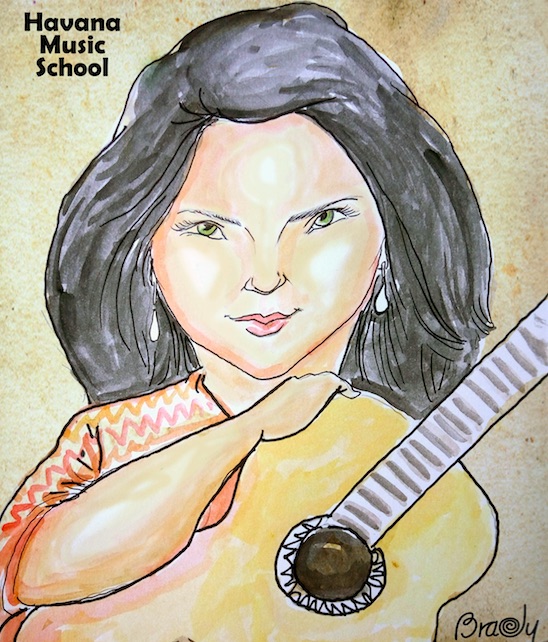 The guitar is one of the instruments that are almost always present in Cuban music. Brought to these lands by the Spanish conqueror, from it six strings came out many native genres such as son, guaracha, bolero and trova.

But not only popular rhythms revel in his notes. The so-called classic, concert or classical music also takes advantage of the interpretative possibilities of this instrument. And to that has devoted much of his life Rosa Matos.

A guitarist with a flower name

Born in Tunas on 17 August 1972, Rosa had since childhood penchant for art. She remembers being very small he wrote a letter to his father, at that time in the fraternal people of Angola, asking permission to join a ballet school, or else let her play with the Ritmo Oriental Orchestra.

It was fortunate for Cuban music that Rosa was decided by the guitar. She began studying at the School of Arts of Las Tunas, and then continues her preparation at the Professional School of Music Joseph White Camagüey. She finishes her studies at the Instituto Superior de Arte (ISA), receiving tutoring from great teachers and soloists like Harold Gramatges, Rey Guerra, Joaquín Clerch and Jesus Ortega.

A road full of awards

During his career as a student, Rosa Matos won at age 12 the first prize in the Amadeo Roldan artistic teaching, Musicalia at the ISA and the Cuban Music Contest Adolfo Guzmán in 1984 and 1986.

She graduated in 1998, year when she wins the prize of the most important event of the guitar in Cuba, the 11th Competition and Festival of Havana, won for the first time by a woman. Such was her interpretive mastery, that she also received the Award for Artistry of ISA, the Prize of the Cuban Radio and recognitions from the teacher Ichiro Suzuki and the luthier Masaru Kono.

From Cuba to the world

Such was the impression that Rosa caused in the maestro Leo Brower, that he invited her to accompany his Night gala in Andalusia, with the Symphony Orchestra of Córboda in 1999. During that year, the two work side by side in scenarios Costa Rica, Liechtenstein and Mexico.

Already in the XXI century, Rosa has not ceased its vertiginous career, appearing in French and Salvadorans scenarios, alone or in presentations with chamber orchestras, trios and quartets. He recorded in 2004 with the label EGREM their first album, titled Angels and Demons, with compositions by Cuban authors.

Later, in 2009, he recorded again with the same label Eulogy Spiral, which pays tribute to his mentor Leo Brower for his seventieth birthday. On this album, Rosa Matos passes the work of the great Cuban musician from his earliest pieces to modern, printing their interpretive touch to each of the cuts on the disc.

But Rosa goes further contributes to train new generations from the classrooms of the ISA, the National University of Costa Rica and the Autonomous University of Zacatecas.