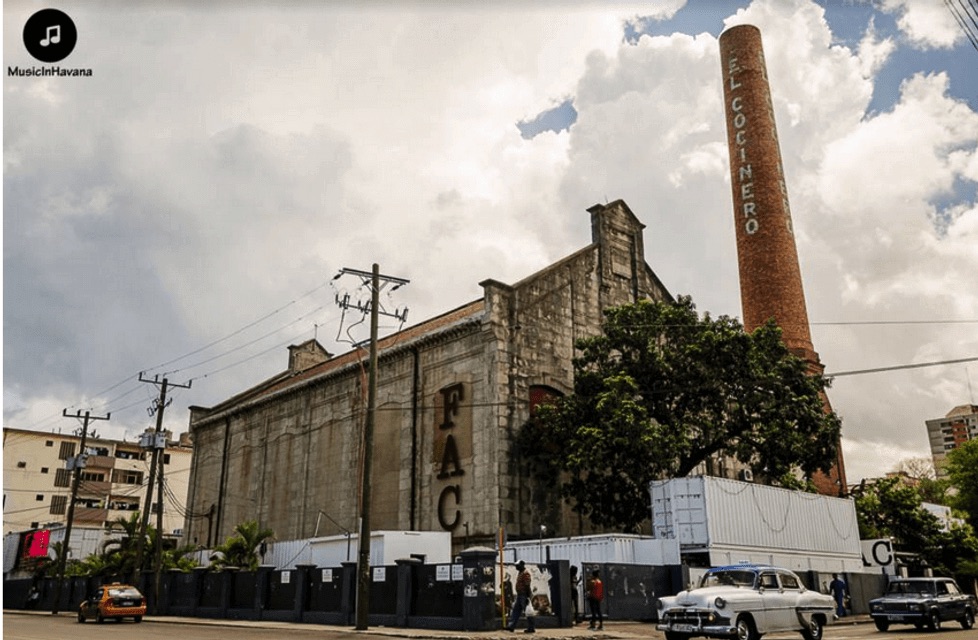 To find the Fabrica de Arte Cubano in Havana is simple.

Shortly before the end of the Vedado and Playa next to the foot of the Iron Bridge (26th Street between 11 and 13), the former oil factory the “Chef” (El Cocinero) is erected. The space of the former factory was badly damaged; bricks, cement and rusted rebar were part of the environment.

A single building was left intact a high-rise fire as a symbol of its former function. This gloomy space was the one that X Alfonso requested to establish cultural the Fabrica de Arte Cubano (Cuban Art Factory) project.

The Cuban Ministry of Culture welcomed the idea of the prestigious Cuban musician, and the necessary arrangements and local remodeling process began. The FAC finally opened to the public on February 13th 2014, thanks to a partnership of many Cuban artists of various government institutions and the commitment of X Alfonso.

The space remained the rarefied atmosphere of the old building, in the purest style rave. The seats are boxes of food; tables, small tables; cushions, cloth bags filled with foam rubber. At the same time, large glass walls allow it to see what happens from one ship to another.

Even the stairs are hidden. On the walls own lighting industries. For decoration, nobody ever would doubt that this place has never ceased to be a factory. In the Fabrica de Arte Cubano (Cuban Art Factory) it survives not only the environment but is actually an “Art factory”. Concert halls, electronica tracks, art galleries, a space for audiovisual presentations, outdoor spaces, performance and theater coexist and night alternate.

The public owns the place. Nobody guide, nobody teaches you. Since you access the FAC, all the space is yours. You can lie in the seats to watch movies, dance the night away in the disco, spend hours in the galleries or come and go from one space to another to “feel” all at once. The decision of each person and have all night, from eight until three in the morning, from Thursday to Sunday to enjoy the bohemian life of Havana.

X Alfonso idea took shape to perfection. The FAC is a building made for and from young people, worked and visited by young people. And of course, welcomes all people who feel as such. The space warmly welcomes musicians, fashion designers, actors, storytellers and everyone who has the ability to “create” an interesting work.

With its four interconnected buildings, the Fabrica de Arte Cubano is the ideal place to enjoy the best of jazz, the fusion, rock, pop, trova, theater and life and pulse of the music capital Havana. And bumping into it with the best artists and musicians in town working or just relaxing, fully accessible to anyone who wants to approach them.