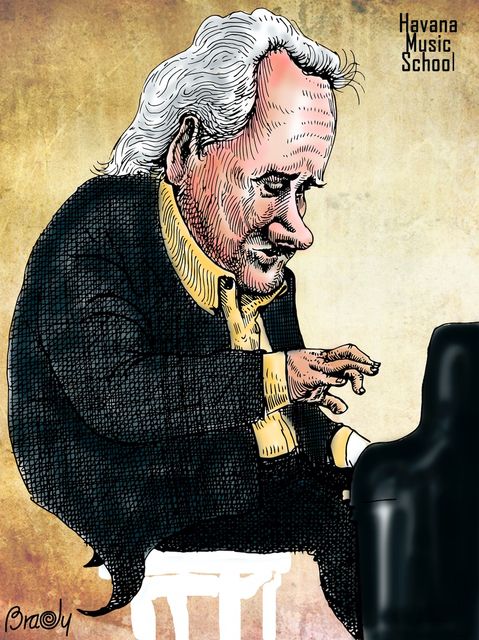 Francisco Pérez Tamayo or Frank Fernández, as he is artistically known, is considered by the specialised critics as one of the five best pianists in the world and is distinguished as a Steinway Artist.

Born on May 16, 1944 in Mayarí, this excellent musician, prolific composer and renowned teacher, began playing at the age of four. His mother, sensing his artistic gifts, became his first teacher and the initiator of a long and fruitful career.

The prestige she has achieved is based on versatility, effort and dedication to the art. Frank Fernandez goes from the classical to the popular, but he also works as a teacher, orchestrator, researcher, composer and cultural promoter.

Not for nothing, in his more than 44 years of artistic life, specialised critics have described him as “a being touched by the divinity”.

The Frank Fernández phenomenon is unrepeatable

Simultaneously to the knowledge of Mozart, Beethoven, Chopin and other universal classics, Frank Fernández has been nourished by the artistic wealth of Cubans such as Sindo Garay, Pepe Sánchez, Manuel Corona and Miguel Matamoros, and this communication with musical art, without scholastic differences between the cultured and the popular, represents the genesis of his art.

More than 34 countries in Europe, Asia and Latin America have acclaimed him for his exciting and passionate performances, and he has performed as a soloist in more than 100 symphony orchestras around the world.

Among the most outstanding events in his career are:

Presentation in Tokyo (1992). It was considered one of the most important cultural moments of that year on Japanese soil.

Special guest at the 50th Anniversary Galas of UNESCO in Paris and Global Panel in Holland.

It would be difficult to list them all, but, among the most prominent are

A look at his extensive discography

As a producer, performer and arranger, he has collaborated with musicians of the stature of Silvio Rodríguez, Adalberto Álvarez and Anabel López.

In one of his most recent interviews, Frank Fernandez said: “I don’t believe that an artist’s technique can be separated from his spirituality, I don’t trust virtuosity and I prepare myself every day as if every performance were my debut”.

What modesty and dedication! It’s not by chance that his prodigious hands, on the keyboard, manage to turn every night into a song of sublime love, they wrap you up in loneliness, nostalgia, longing and then, suddenly, they make you fall in love and make you feel like the only spectator in the room. Only the great ones can do that, and Frank Fernández is and will be one of them.