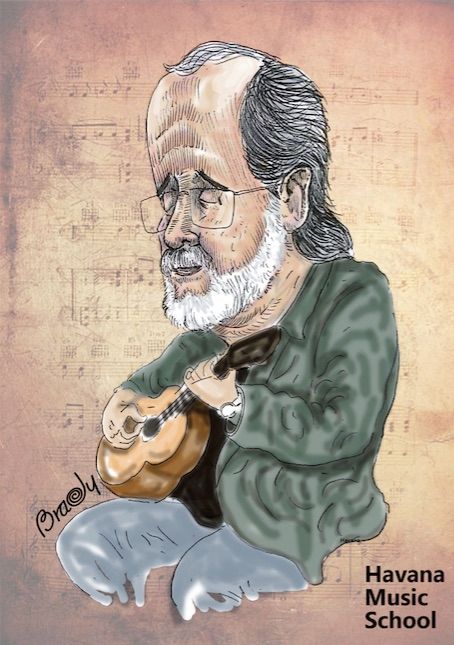 A musician for intimacy, solitude, reflection. A poet with a guitar. An author with all his lyrics. A man who has come to say impossible things, because the possible is already known too much.

This man who was born on November 29, 1946 in San Antonio de los Baños, would become the founder of the Nueva Trova Movement, along with Pablo Milanes, Noel Nicola and Vicente Feliú.

Currently Silvio Rodríguez has composed more than 500 subjects and is known in almost all the world. It has a score of published discs. His influence on a whole generation of young Cuban musicians has been recognised without a doubt, even by those who disagree with his political ideas.

The music for the young Silvio Rodríguez

Silvio Rodríguez, being just a boy of 17 years, knew that his way was music. During his military service he was an occasional pupil of Mario Romeu. In 1967 he appeared in the program “Música y Estrellas”. His debut was with his songs: “Sueño del colgado y el árbol”and “Quédate”.

The audience was surprised by the issues of the young Silvio Rodriguez and his popularity was increasing until he was conferred the television space “Meanwhile.” But the program was caught up in the cultural controversies of the time and was finally canceled.
The professional life and the revolution of Cuban music.

The professional life and the revolution of Cuban music

In February of 1968 participated in the foundation of the Center of the Protest Song of the House of the Americas, next to Pablo Milanes and Noel Nicola. At that time, the theme “La era está pariendo un corazón” reached a great diffusion in the voice of Omara Portuondo, which made Silvio much better known.

In 1969, he joined the Grupo de Experimentación Sonora of ICAIC (GESI), in the company of Pablo Milanes, Noel Nicola, Eduardo Ramos, Sergio Vitier, Leonardo Acosta and later Emiliano Salvador, Leoginaldo Pimental and Sara González. All were under the tutelage of Juan Elósegui and Federico Smith, while Leo Brouwer was the director of the group.

During this moment he composed songs like “El papalote”, “Cuba va”, “El Mayor”, “Canción de la nueva escuela”, among many others. All sought, in their lyrics, the reflection of a society; And in its melodies, a sound revolution.

Music for the movies became another of his acknowledged works. The soundtrack of “El hombre de Maisinicú” is his own. These projects were also part of what he had learned at GESI before its disintegration.