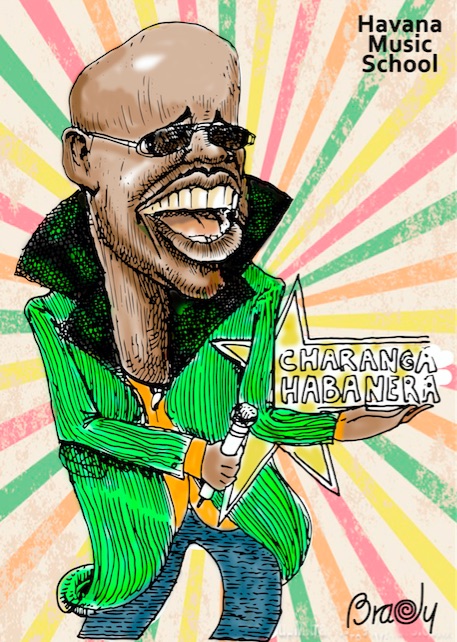 Known for its sticky rhythms and lyrics full of mischief, Charanga Habanera is an icon of Cuban popular music, with albums as well-known as Me sube la fiebre, Hey you loca! or Soy cubano, soy popular.

Its peculiar “mechanics” not only attracts the national public, but people from all over the world. In his numerous international tours, the band has shared the stage with stars like Ray Charles, Frank Sinatra and Whitney Houston, among many others.

From the traditional to the popular dance music

Currently headed by the prestigious musician David Calzado, Charanga Habanera emerged in the late eighties as a project committed to the Sporting Club of Montecarlo. In its beginnings it counts on young musicians like David Calzado, Gerardo Aguillon, Jorge Emilio Maza and Juan Carlos González. Under the direction of José Picayo, it debuts with traditional rhythms such as guaracha, mambo, bolero and chachacha. Its first independent production is titled From Havana to Monte Carlo.

In tune with the explosion of new rhythms and harmonies given in Cuba by that time, Charanga Habanera incorporates new members and instruments, and perfects its sonority. For 1992, he recorded the album Fiebre de amor, better known as Me sube la fiebre, which has the collaboration of Juan Manuel Arranz and Manolín “El Médico de la Salsa”. After signing with the label Magic Music Universal in 1994, the group performs several international tours and launches Hey You Loca!, followed two years later by Pa’ que se entere La Habana.

The delirium of the multitudes

The album Tremendo Delirio (1997) marks the end of an era for the Charanga, with the departure of Danny Lozada in 1998. But this loss does not dent the success acquired after almost a decade giving the best of popular music. Throughout that year, the group maintains four songs stuck on Cuban radio and television. He also won the award for the most popular orchestra in Cuba. The next three years will maintain its popularity shinning before the public and the critic.

In 2003, Charanga Habanera is nominated for the Latin Grammy Awards with the album Live in the USA, and two years later in Orgullosamente Latino, in the categories of best group, best album and best music video. In addition, it has received numerous prizes in musical events like Cubadisco and Premios Lucas.

In his international tours he has toured regions as diverse as South America, Mexico, the United States, Europe, Japan and North Africa, performing at festivals such as Hard Rock (Mexico), or the Campanille Festival (Italy). This has allowed him to position himself as one of Cuba’s best-known popular music groups.

If you like La Charanga Habanera, shares this article with your friends on social networks, and do not forget to subscribe to our site to know more about Cuban Music.