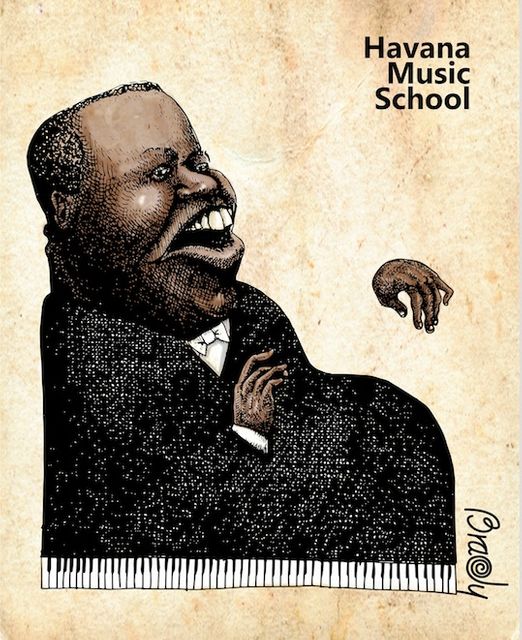 There are many theories about the origin of the nickname Bola de Nieve (Snowball). Some claim that was devised by the inhabitants of the hometown of the musician, others state that was Rita Montaner, who surprised by his genius, called him for the first time.

The truth is that this virtuoso, whose originality and rattled voice conquer all stages around the world, he knew moving from its very humble beginnings to international fame with the breakneck speed of avalanches.

Bola de Nieve, whose real name was Ignacio Villa, born in Guanabacoa, one of the villages more musical and folk tradition. Inhabitants of that village where also Ernesto Lecuona and Rita Montaner.

In 1923 he began studying music theory, and his early works were more modest accompanied the silent films which by then was cast in the film, or acting as a substitute at the Teatro Carral when the pianist was missing.

However, very soon Bola de Nieve gets the recognition of much of Cuban music critics. However, Bola de Nieve did not stop, and his leap to fame was swift.

Bola de Nieve: Mexico and Havana First, then the World

It was Rita Montaner saw right away the talent of the musician, after seeing him play in the band of Gilberto Valdes. Then, she chose him for companion on her Mexican tour. There, in the Politeama theater and in front of over 3,000 spectators he improvised “Tú no sabe inglé, Vito Manué” replacing Montaner itself.

The success was such that continued to play in the country after the singer returned to Cuba in 1933. His countryman Ernesto Lecuona discovered in one of those occasions and also become one of its most loyal fans. He launches his career back in Cuba, convinced him back to the island and gives away their art to Cubans.

Upon his return and as part of the music company the author of “La Malagueña”, began a national tour and later by the most diverse places in the world such as Russia, China, Latin America and the United States. In the late 40s’ first sang songs from his authorship. The list included the great successes “Carlota ‘ ta morí” y the universal “Mamá Inés” in honor of his mother. In 1950, he starred in CMQ radio Gran Show de Bola de Nieve, which also served as conductor program.

For the rest of his career he followed working with important Cuban and foreign musicians and fame did visit France, Italy and Denmark, among others. While singing mostly in Spanish, he composed pieces also in English, Italian, French and Portuguese. His unforgettable voice and unique style, has left for posterity, besides those already mentioned songs, others like “Si me pudieras querer” o “Arroyito de mi casa”.

Bola de Nieve died in August 1971, affected by a heart disease. This musician, who did not consider himself composer or singer, is an example of modesty and quality of Cuban musicians.

If you found this article informative and love the music of this Cuban star, share it on your social networks. And if you want to know more about Cuban music, subscribe to our website.