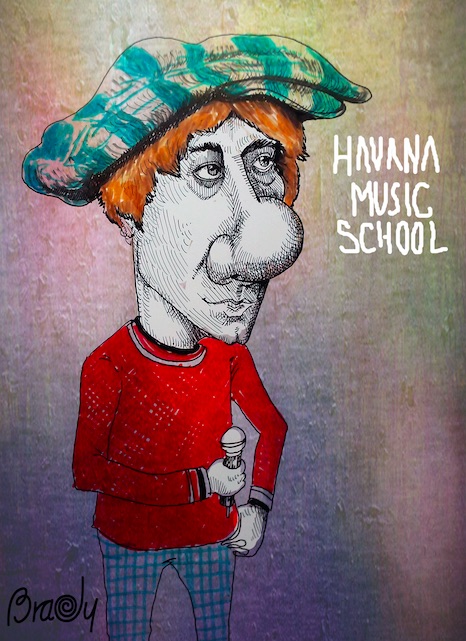 At the end of the last century the production of the Cuban children’s song decreased and reggaeton emerged as  a musical, cultural and social phenomenon.

The catchy rhythms and easy lyrics (and in many cases easy and not appropriate) cause an effect to say the least harmful: Cuban children begin to dance, hum and follow their influence.

Of course, this although the majority was not the whole. With the irruption of alternative audiovisual media, foreign materials for children arrived in Cuba, of much better quality and invoice than the national products of that time.

Such was the case with the children’s songs by Miliki (Emilio Alberto Aragón Bermúdez). A classic of children’s work, a little came to save the dreams of Cuban childhood with Susanita, La gallina turuleca, “Hola Don Pepito” and “Había una vez un circo”.

Just like the title of the 2013 album, Gracias Miliki, on behalf of Cuban parents. It was not the first time that children’s songs from other parts of the world were sung in Cuba. Maria Elena Walsh is a good example, as we fondly remember El Reino del Revés, La Pájara Pinta or El brujito de Gulubú. But, once again, thank you Miliki.
Kiki Corona, defender of the Cuban children’s song

An honorable line of defense for the Cuban children’s song of that period is singer-songwriter Kiki Corona. A member of the Nueva Trova movement, Enrique “Kiki” Corona was born in Havana, on January 13, 1960. He studied at the Alejandro García Caturla Conservatory, specializing in guitar.

Without abandoning her artistic career as a troubadour, Kiki put her voice to almost forgotten songs such as Marinero Quiero ser and created many others, which she collected on her album Nanas para ti, nominated for the 2001 Cubadisco award. Her work in children’s television programs such as Arcoiris Musical or the children’s music contest Cantiendo al Sol was a front in defense of Cuban children’s songs.
The beehive: an expected help

With a proposal for children made by children, La Colmenita was another of the spaces that kept the Cuban children’s song alive. Directed by Carlos Alberto Cremata since 1990, this theater company has managed to overcome deficiencies, animating the National Festival of Children’s Song Singing to the Sun since 1995. Furthermore, they represent musical works that rescue the way of doing and singing of the Cuban child. Their commendable work has earned them the honor of being named a UNICEF Goodwill Ambassador.
Lidis Lamorú and her patio

This Holguin woman with a sincere smile was born on April 20, 1974 and graduated in History from the Pedagogical School in her province. However, her musical concerns and her love for children has led her to other paths. Since her television program El patio de Gabriela, Lidis Lamorú has managed to win the hearts of children and revive the tradition of the great children’s singer-songwriters with the blow of the guitar.

His songs Por Amor, Gabriela or Don Lagartijo have brought a fresh air to the Cuban children’s song, which earned him the Venga la Esperanza award from the AHS in 2006. He is currently working on his second album of 12 songs, of which has advanced the title of two of them: Nana to sleep Lorena and The girl and the angel.
Luiba Maria Hevia: honor to whom honor deserves

Another of the new cultivators of the children’s song of our days is the singer Luiba María Hevia. Topics such as Señor Arcoiris, Estela granito de canela, El Trencito y la ant, El Seller de Asombros or El Despertar (along with Carlos Varela) distinguish the career of this singer-songwriter; that explores the most authentic Cuban rhythms to give a new dimension to her music. The habanera, the punto guajiro, the sones and the tangos follow her sweet voice.

Her discography includes albums exclusively dedicated to children, such as Señor Arcoíris (1995), Travesía magica (2001), ¡Atentos! I bring a gift (2005), Granito de canela (2011) and one of her most recent works: Liuba María Hevia sings to Teresita Fernández (2012). Thus, with the mention of this album, a tribute to the great teacher of Cuban children’s song, this series of articles closes. With forgiveness for the omissions that I have been able to incur, rather than making a compendium of an encyclopedia, I wanted to recall.

Remember those afternoons when my mother took me for a walk without breaking streetlights and the great Teresita Fernández sang to me, very closely and sometimes just for me:

“Put a little love on things that are ugly, and you will see that sadness changes to color …”