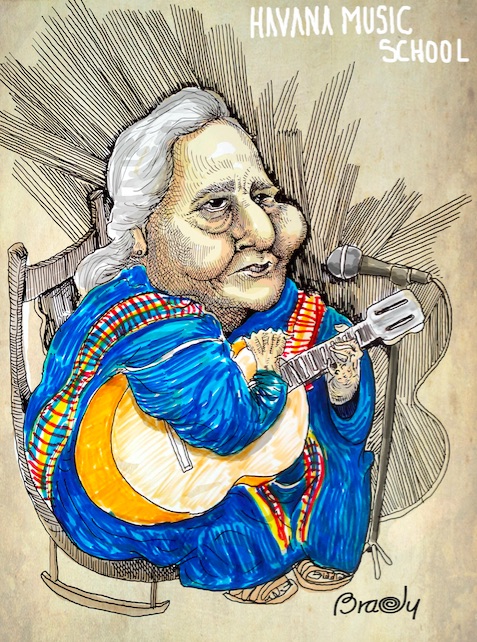 I still remember those Saturday afternoons in the 70s of the last century, when my mother took me to the Plaza de la Catedral, near the bay and in the heart of the Historic Center of Old Havana. With my child’s eyes, everything was wonderful, but there was a special person I was looking for.
teresita

That sweet and patient lady did not attract attention at all between the coming and going of the passers-by. You couldn’t look for Teresita Fernández with your eyes: she was recognized by the sound of the guitar that always accompanied her and by her voice, which although it did not stand out for its volume if it did so for its tessitura … which was like a caress in the heart.

Thus, late after afternoon my childhood and that of millions of Cuban children unfolded, whom Teresita dressed in songs to dream of kites, boats, butterflies and stars.

Teresita Fernández, the teacher who sang

Teresa Fernández García was born on December 20, 1930 in Santa Clara. Since she was little she sang on a radio program directed by her mother Amparo García, although her musical learning was self-taught. She combined singing with teaching, in such a way that in 1959 she obtained the degree of Doctor of Pedagogical Sciences. Her musical approach was simple but direct.

Accompanied only by her guitar, she was viewed with suspicion by the art scene of the early 1960s as unspectacular. Ramón Veloz and the Martí Sisters sang her songs, but she was considered more as an author than as a performer. It was the great teacher Bola de Nieve who welcomed her and made her known in his rock of the restaurant Monseigneur del Vedado Habanero.

El Bola gave Teresita the most tender compliment: “You don’t need any other decoration than the song”. Teresita won her own space at the Vedado Cocktail Club, promoting other troubadours who, like her, sang in a simple but direct way. It was there that this teacher reached out to someone who would become one of the icons of Cuban song: Silvio Rodríguez. In 1974, at the request of Celia Sanchez, a space for the troubadour song by Teresita called La Peña de los Juglares was created in Lenin Park, space and cradle of the Nueva Trova movement.

Teresita and the children

Since the 1960s, Teresita developed two children’s radio programs called Musa traviesa and De Volver, and made her television debut with La casita de Azucar, along with the puppets Pitusa and Eusebio. Although the program disappears in the 70s, even Cuban children sing the theme of these two dolls.

Teresita alternated her work in the Nueva Trova with her meetings for children in the Plaza de la Catedral and in La Colina de los Muñecos in Lenin Park itself. From her, all Cubans remember children’s songs such as Tía Jutía, Sing little bird, My kitten Vinagrito, Give me your hand and we will dance, Tin, tin, the rain or Lo Feo, among many others.

Her work as a pedagogue, author, performer and narrator could only be interrupted by her death, on November 11th, 2013. Along with the Mexican Francisco Gabilondo Soler and the Argentine María Elena Walsh, Teresita Fernández is considered among the great masters of the song for children in Latin America; and the one that opened the way for many other figures who accompanied her on her paper boat trip.