The Marquez Sisters – Pause between the trova and the son 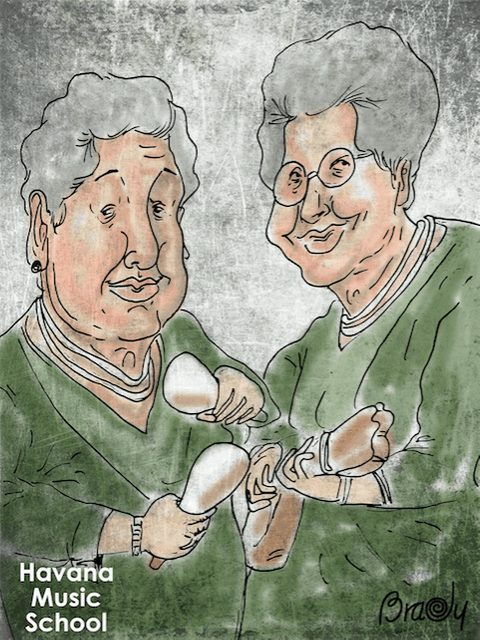 In the decade of the 20’s of the last century, a movement emerged within Cuban music where the frontiers between the traditional trova and the contagious oriental son were lost. Mixture of troubadour lyricism with the harmony of dance rhythms, this so – called intermediate trova had in Maria Teresa Vera, Miguel Matamoros and Ñico Saquito their biggest promoters and performers.

This is how the trios and the quartets are incorporated into the musical scene, also creating subgenres such as bolero son, guaracha and a more modern son. One of the most outstanding trios in this stream, especially in the guaracha, was the Marquez Sisters.

They were not exactly three…

To be honest, they were not just three sisters, and the trio was sometimes a quartet. Its popularity gained a boom between the 40s and 60s of the 20th century, becoming one of the favorite groups not only on the island, but on the American continent.

The father of these divas, Alberto Márquez Gómez, was a relevant musician and teacher, who founded the Municipal Band in Puerto Padre in 1914. Also prolific in life, Alberto had fourteen children, eleven of them women. Six of them come to integrate the Marquez Sisters, who in turn unfolded in two trios.

The Marquez Sisters debuted in 1931 in his hometown, being the first female trio in Cuba and throughout Latin America. They are presented the following year in Santiago de Cuba, with great success of public and critic.

The school of Santiago and the ascent

It is in this city where the six sisters settle until the end of the 30’s, a period in which they interact with what is best and shines in the cultural panorama of the Cuban East.

In 1937, they auditioned in the capital for several stations and theaters, performing in the Marti and in America theaters, and the stations RHC, CMQ and Radio Lavín. In this period the Marquez Sisters share the stage with Esther Borja, Miguelito Valdes, Bola de Nieve, Orlando de la Rosa and Rita Montaner, among other important figures of that time.

They recorded with RCA Victor in 1941, touring later to Puerto Rico, Haiti, Panama and Mexico, where he returned in 1946 to re-record and participate in the Pervertida Mexican film. In 1947 they were acclaimed by the critics as the best vocal grouping in Cuba.

This was followed by a 40´s and 50´s filled with tours, prizes, records and appearances on the big screen that launched to stardom the Marquez Sisters. For economic reasons, they decide to settle in the US in the late 1950s.

In 1965, after a break in their careers, the Marquez Sisters brought to light their LP Las Hermanas Márquez vuelen, promise that must be broken for years to come by the illness and death of their parents.

Not until 1990, Albertina and Nerza scene again, and in 2002 recorded the CD with Paquito D’Rivera Rumor. Then they recorded Mi Tierra and participate in the project Buena Vista Social Club.

After that long pause, the Marquez Sisters obtained in 2010 the Award of Excellence by the Latin Grammy.

If you want to know more about Cuban music, do not forget to subscribe to our website. And, please, help us to promote good music by sharing this article in your social networks and leaving us a comment.