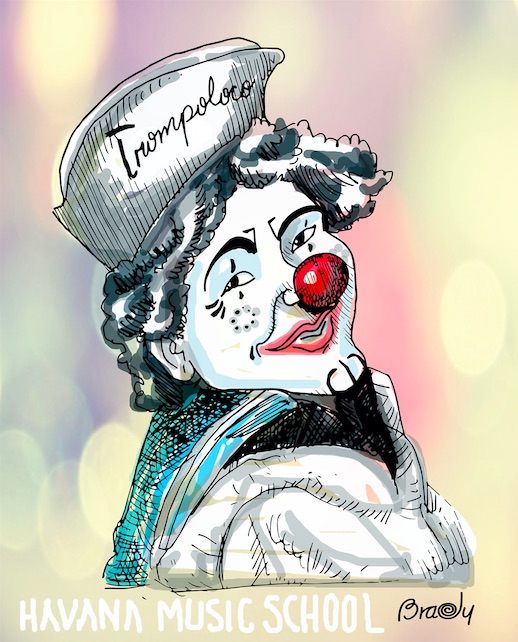 Although the teacher Teresita Fernández was the greatest exponent of the children’s song of the 20th century in Cuba, she was not the only superstar of our childhood.

Contemporary with her coexisted figures who gave everything to brighten our childhood. One of them, who more than a singer was an institution of Cuban culture at work for children was the great actor Erdwin Fernández.
Erdwin Fernández, the Trompoloco clown
crazy trumpet

Erdwin Fernández was an actor who masterfully brought circus art to television. Together with Nilda Collado, his wife, he started the television program Amigo y sus amiguitos in 1962.

With songs, stories and games, this program marked a whole generation educating and spreading joy. With his childish voice, Erdwin engaged in a dialogue with a supposed grandmother in his Say why, which made us reflect on the elderly and with whom more than one father had to turn his head to hide a tear.

Another example is The Ugly Doll, where Trompoloco taught about beauty and the real value of what makes us happy. For Erdwin, the clown was not a mere laughingstock, but a conduit for forming values.

Consuelo Vidal Regal was the great animation diva in Cuba. Actress of indisputable stature, she never lacked the time to lend her voice to the interpretation of children’s songs. She was a work partner of Erdwing and Nilda in Amigo y sus amiguitos, and later she appears with Ana Nora Calaza in Tía Tata tells stories.

To her endearing voice Cuban children owe Paper Boat. Even today, this is probably the first song taught to our little ones. If you are Cuban or the son of Cubans, you can surely sing it.
Enriqueta Almanza, the mother of songs

If Consuelito was the voice of “Barquito de papel”, Enriqueta Almanza was her mother. This Cuban pianist and composer was born on June 15, 1934 and studied at the “Hubert de Blanck” and “Amadeo Roldán” National Conservatories of Music in Havana. She served as a concert pianist and music teacher at the Instituto Superior de Arte.

Along with Teresita Fernández, she was the most prolific of the children’s song composers that this island has produced. From his harvest he has bequeathed for all present and future generations, in addition to the little boat, The lead soldier, Let’s pamper, The crab in love, And there was once, The soap song, To play, Children’s protest, Cat serenade, In the theater of the dolls, Crying of onions, The carnation and the lily and another of the great hymns of Cuban children: Juan doesn’t care!
Ana Nora Calaza

The actress, puppeteer, singer and composer Ana Nora Calaza Fortes completes the picture of the great stars of children’s music of the past century. She was the other mainstay of the two children’s programs mentioned above, and the voice of their follower Rainbow Musical, which began broadcasting in 1987.

Although they were not the only ones who dedicated time and effort to the Cuban children’s song, these figures gave an impeccable luster to a childhood that ended at the end of the last century. There are still notable examples such as the interpretation of El picaro pilluelo by the actor José Antonio Coro or the Reparador de Sueños by Silvio Rodríguez, and many others that we did not mention, but also filled our childhood.

With the arrival of the 1990s and the collapse of the socialist camp, the number and quality of programs dedicated to the youngest members of the household suffered a severe blow. But even so, a new awakening awaits the Cuban children’s song.