Haila Mompie – The diva of the son 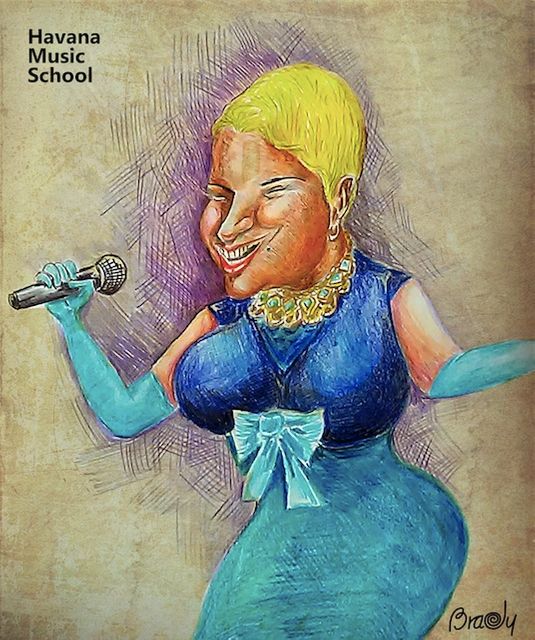 Haila Mompie González was born in the province of Las Tunas on January 28th, 1974. Her father, an amateur singer, and her mother, a hair stylist, both allowed her from a very young age to make small incursions into music and dancing.

In 1991, after dedicating several years to dance study, it is incorporated as vocalist to the Septeto Tradition group and thus she begins to cultivate the traditional Cuban music.

From that moment, Haila Mompie discovers herself before a surprised audience by so much talent. She made her first international tour that same year, within the show “Guajira Habanera Show” with the Habana Son group.

She joined the Bamboleo group in 1994, where she stands out for her excellent voice and high level of improvisation. Haila Mompie is already considered as one of the most important soneras of her generation.

She performs concerts in Italy, Holland, England, the United States, Belgium, France, Peru and Mexico. Not satisfied with this and with the tiresome national tours, she manages to place the orchestra among the most popular in the country.

Four years later, Haila decides to join with the consecrated musician and composer Leonel Limonta, and they found the Azúcar Negra orchestra. Much acclaimed by the foreign public and gaining more and more followers, she recorded one of the most important albums in her musical career, Anda andando, which became a hymn for all the dancers.

So high was the prestige achieved by her performances, that that same year she is nominated to the Latin Grammy with her album La rumba soy yo. In this production, the renowned singer shows her beautiful tone and great versatility.

Some of her most important record productions

Together with the Habana Casino group, she launches the production Mala, which earned her the Cubadisco 2012 award.

She is currently involved in two major campaigns: “Prevention of HIV / AIDS” and “Non-violence against women”. The latter is promoted by the United Nations.

“The Diva” of the Son

Haila is a symbol of good art and high interpretive quality. Tony Pinelli, a Cuban musicologist and composer, recently commented: “Haila dresses up as a nation with the sheen that only stars show, and manages to be Cuba.”

The singer herself expressed in a press conference offered on August 5, 2012: “I have developed a career with dignity […] with much effort and sacrifice, especially in the part of being a mom. I have missed many beautiful things, among them, not being in the most important moments of my son’s growth. “

With these words lets a glimpse of a woman who gives herself in body and soul to her audience. Haila Mompie is, simply, “The Diva of the Son”.