Los Zafiros – Four voices and a guitar is enough 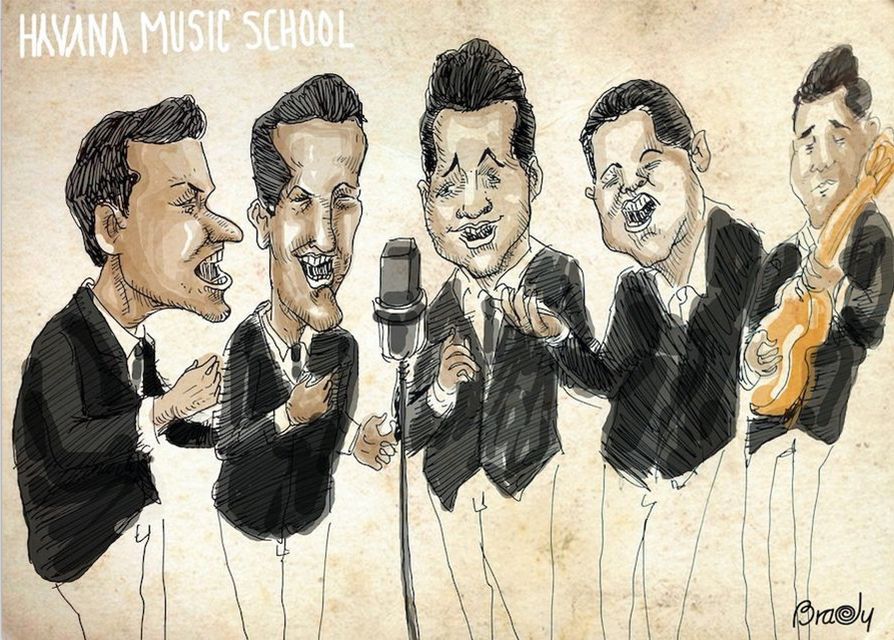 The history of vocal quartets in Cuba would not be complete without the mention of Los Zafiros. With only four voices and the accompaniment of an electric guitar, this Cuban musical group from the 60’s and 70’s, succeeded not only in the island but also outside it.

How a gem is born

From all its members, only Miguel Cancio had some voice experience. After participating in the choir of the Normal School, Miguel became part of the vocal group of Facundo Rivero and had toured six months in Venezuela.

Due to his friendship with Leoncio Morua and their relationship with composer Nestor Mili, they met Ignacio Elejalde, who brought into the group the Chinese Eduardo Elio Hernandez. So, at Nestor’s house, Miguel, Leoncio, Ignacio and Eduardo began to sing and create what later would became Los Zafiros.

To these four voices was later added the guitar of Oscar Aguirre. The first songs of Los Zafiros would be “Mi Oración”, “Y sabes”, “Linda chiquita”, “Cuando yo la conocí” and “La caminadora”. Armed with this repertoire, the five youths began to be known, first at the bars of their native Cayo Hueso and then throughout Havana, Cuba and the world.

Los Zafiros were presented for the first time on television in the Música y Estrellas show, from Manolo Rifat. Such was their success that soon they also appeared in Desfile de la Alegría with the great Rosita Fornés and then in El Casino de la Alegría with Germán Pinelli. Their first big gig was at the Oasis de Varadero cabaret, then the Cabaret Nacional del Prado and the Caribbean cabaret at the Habana Libre Hotel. His final takeoff arrives in 1965 with his trip to Paris, as part of the Music Hall of Cuba. There they shared stage with The Papines, Pello el Afrokán and Elena Burke.

Some changes, the same success

Oscar Aguirre, guitarist and musical director, left the band to work abroad in 1966 and he was replaced by Manuel Galban, beginning to work also as director of the group. The real merit of Los Zafiros consisted that, despite working the traditional classic American quartets vowels that abounded at that time, as The Platters, they included in their music purely Cuban elements such as the bolero and the rumba and other Caribbean music styles as calypso and also bossa nova, with the twist, doo-wop, the R&B and rock. They recorded the LP Los Zafiros (1963), Bossa Cubana (1963-1967), and his old songs were remastered in CD Los Zafiros Story (2006)

A gem that went out slowly, but still shines

Los Zafiros, after more than ten years of success, got separated in 1973. Manuel Galban followed his path in music and joined the Buena Vista Social Club. In 2003 he won the Latin Grammy award for his album Mambo Sinuendo. He died on June 7th, 2011. Eduardo Elio, tenor and main voice of many of the songs of Los Zafiros, died in 1995. Ignacio, falsetto and tenor, died in 1981 due to a heart attack. Leoncio was hit by a bus and died in 1983. Miguel, based in Miami, collaborated in the making of the film “Zafiros: Locura Azul” (Zafiros: Blue Madness), released in 1997 at the International Festival of New Latin American Cinema.

Los Zafiros was a group that, taking the best of the international scene, were able to integrate the popular Cuban music with a success that still has an impact on how to harmonize the vocal quartets. His legacy lives on in bands like Los Nuevos Zafiros, who make tribute to this myth of the Cuban music.