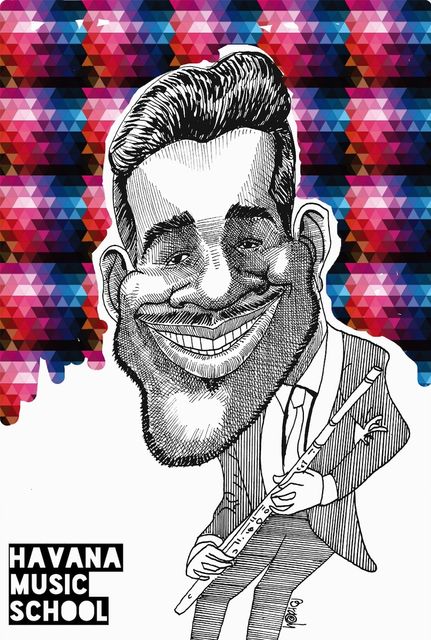 The danzón is the national dance of Cuba. However, until a few years ago it was a rhythm almost forgotten. A genre that brought so many joys and fun to the dancers of our archipelago was relegated to traditional groups that had always had it in their repertoire.

It may be thought that perhaps it would have disappeared altogether, if it were not for Ethiel Failde, the young musician director of the Miguel Failde Orchestra.

Music in the veins

The flutist Ethiel Failde is the great-great-grandson of the creator of the first Cuban danzón “The heights of Simpson”, Miguel Failde from Matanzas. As a musician and as a Cuban, the young man proposed to return to life the rhythm that made his great-great-grandfather and his generation dream, and in tribute to them he founded the Miguel Failde Orchestra in 2012.

Of course the danzón is the base of the repertoire of this group, which also grows the mambo, the chachachá, the danzonete, the son, the bolero, the timba and others. It has a charanga format with a more developed metal drum including alto saxophone / clarinet, 2 trumpets and 1 trombone.

The average age of the Orquesta Failde musicians does not exceed 30 years. But they have already performed in high level venues such as the House of the Americas, the Karl Marx Theater, the Place des Arts in Montreal, Canada and the Kennedy Center in Washington, United States.

The young Failde has led this talented orchestra through the paths of renewal and has thus managed to combine genres as apparently distant as danzón and timba, with lyrics that reflect the current situation of Cuban society and its problems. Among its themes stand out the musicality of the poem of Carilda Oliver Labra from Matanzas: “Me desordeno” and its excellent version of the traditional “Almendra“.

The love for his musical roots is remarkable and we can see it in the words of Ethiel Failde, when he says that danzón belongs to us all because those who perform it, dance, think or study must feel heirs and followers of a story that unites us and make us proud and transcends individualities.

This young group invites us to live with them their passion and to relive our national dance.

Talking about records and prizes

His first album Llegó la Failde appeared in 2016, produced by EGREM, with 12 songs, almost all danzones and maestro Joaquín Betancourt as musical producer. In 2019 they recorded Siempre tu voz, a tribute to Benny Moré, in collaboration with Omara Portuondo, on the centenary of the deceased singer. It includes 9 versions of classics popularized in the voice of Benny.

Although his career is short, they have already obtained several nominations and awards:

So if you are interested in Cuban music and want to know more about the current events of this and other musicians of our country, visit our website for more articles. And support us, sharing our content through your social networks.