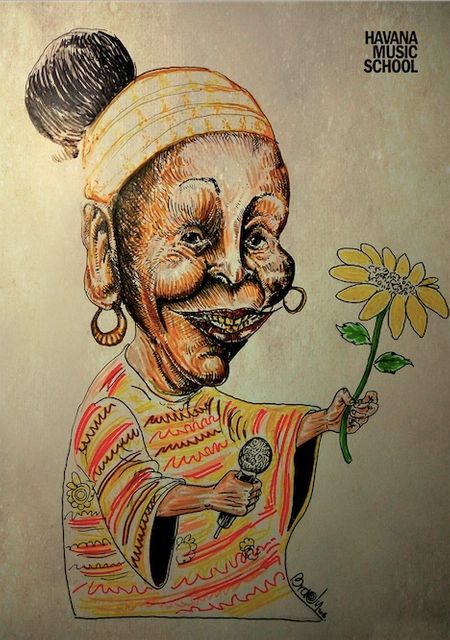 The female voices have earned a top place in Cuban music. Much of this fame is due to historical D’Aida quartet. Omara Portuondo shone with light among its members

Such was her vocal quality that the announcer Manolo Ortega christened as “the girlfriend of filin”.

Omara Portuondo was born on October 29th, 1930, at the Cayo Hueso neighborhood. Her mother, of aristocratic descent, succumbed to the charms of a baseball player.

As it couldn’t be otherwise, as a child she was always surrounded by music. Omara Portuondo grew up listening to the songs of Sindo Garay and musicality of Havana.

Her career began in the Tropicana cabaret. Her sister danced there and Omara followed her to the rehearsals. In 1945 one of the dancers retired shortly before a premiere, Omara knew all the dancing and had the audacity to replace her.

Her performance was a success and began her career as a dancer, where she formed a memorable duo with Rolando Espinosa. After her debut at Tropicana, Omara joined forces with her sister Haydee, and sang on weekends with pianist Frank Emilio in cabarets of the Havana scene. In her songs she blended bossa nova, jazz and blues, which gave rise to Filin.

In the early years of the 50 ‘was part of the Anacaona orchestra. But 1952 will mark the time of a crucial change on her career. The pianist Aida Diestro joins Omara and her sister Haydee, Elena Burke and Moraima Secada to create the vocal quartet Las D’Aida. The quartet became common in major cabarets of Havana, as the Sans Souci or Parisien. The quartet went beyond national borders and tours to several American countries, especially the United States.

Her sister Haydee did not return from the tour in 1961, but despite this, Omara continued with Las D’Aida until 1967, when she decided to start a solo career. As soloist, her fame continued to rise. With the Papines she went to Japan, and also she gave her art in countries as diverse as France, Czechoslovakia and Sweden.

In the 70s she recorded with the Aragon Orquesta, and during the 80s she made a memorable album with Adalberto Alvarez. In 1983, the film director Fernando Perez underwent a tribute with the documentary Omara. Alongside legends like Compay Segundo and Ibrahim Ferrer budded musical laurels in the Buena Vista Social Club phenomenon.

The project, created by Ry Cooder, traveled the world and the self-titled album was a Grammy in 1997. For his vocal qualities, Omara Portuondo was dubbed “Buenavista´s Diva “. In 2009 with the album entitled Gracias, she won a Latin Grammy and became the first female Cuban resident on the island to collect the prize.

A year later she recorded for Disney’s Spanish version of the song from the movie The Princess and the Frog. The successes of Omara not only transcend borders, but time itself. She’s a great representative of the musicality of Havana.