Study music in Cuba – A journey through all continents 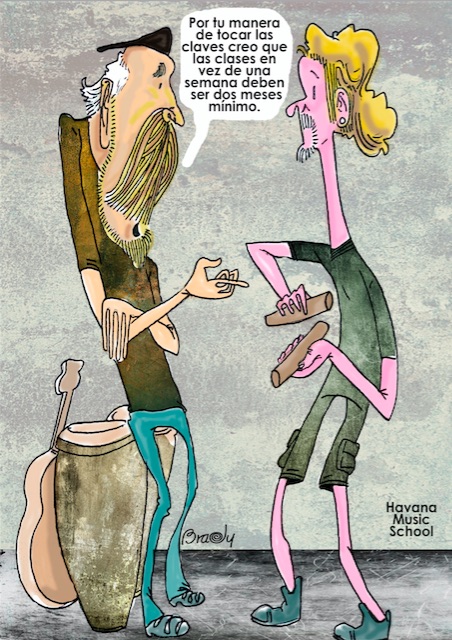 To study music in Cuba is to make a tour of its origins.

Before colonization, Aborigines had rudimentary but functional music instruments, from the Caribbean and Taino culture, such as mayohuacan a wooden drums; the guamos, shell trumpets and flutes made from canutos or bones, among others.

Today, each Cuban rhythms carries a story that did not stop in the Aboriginal Villages. Studying music in Cuba allows to know a tradition that has left both popular and academic way. The evolution of Cuban music is marked by the Spanish, African, Asian, American and even Arabic influence.

The formation of the Cuban musical identity

With the conquest, the Spaniards brought their music that was itself an ethnic mosaic with mixed genres like flamenco rumba. The richness of its traditions got mixed with the African culture introduced on the island as slave labor force.

This process of musical transculturation did not prevent the African people to keep their own rhythms, mainly the Yoruba culture in Nigeria and Bantu in Angola and Congo. For example, the Epiphany day, celebrated every January 6th, became a popular religious festival where music of African descendants began to mix with the Spanish one.

This was the origin of carnivals and parades, which would mixed later with the Asian culture and it’s Chinese famous trumpet.

Sacred music was also of great importance, as reflected in the work of Esteban Salas, who organised the first orchestra of classical music in the late eighteenth century, in the Cathedral of Santiago de Cuba.

But it was not until the first decade of the nineteenth century that the National Symphony Orchestra of Cuba merges with a full format, which Cuban music had a rapid evolution away from European models. Studying music in Cuba is to feel a continuity that is born in the piano Saumell, Ignacio Cervantes, Cecilia Aritzi and is reviving great violinists as Claudio Brindis de Salas. The latter was the director of the renowned orchestra La Concha de Oro, living example of a Typical Orchestra promoting dance music as the contra dances, guarachas, stomping, among others.

The triumph of the Cuban Revolution brought mass culture and the revitalization of the roots. Studying music in Cuba became a citizen’s right, with the founding of the National School of Art (ENA) and Art Institute (ISA). They were indigenous movements as “nueva trova“ or Afro-Cuban jazz and timba, but many rhythms continued to flow and joining country music, including pop, rap and rock, which helped to consolidate and disseminate the essence of Cuban music.

to study music in Cuba.