The enigmatic sound of Cuban shekere 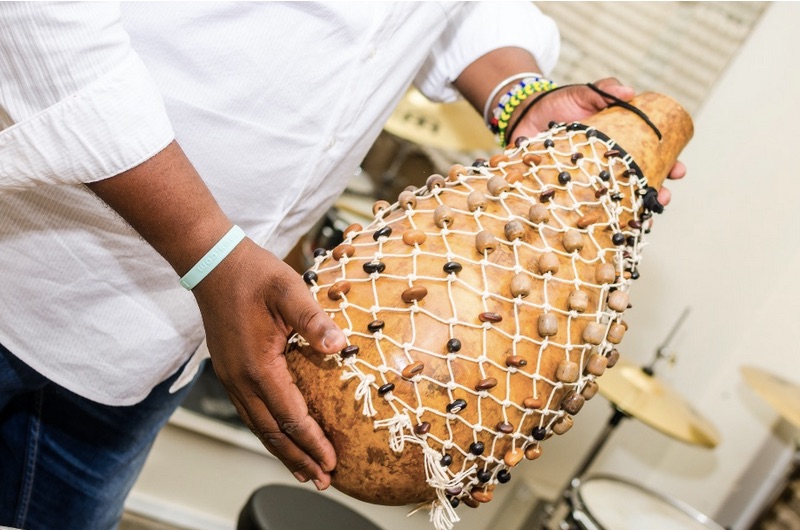 Originally from Africa, shekere is a percussion instrument consisting of a dry, hollow gourd, which is covered with a network accounts (stones, shells, etc.). It is used in religious rituals, but also in popular dance music and Cuban jazz.

This instrument came to Cuba through African slaves,  brought by forced into Cuban soil. Of course, they had to re-make it, using the materials that existed in the island … so the Cuban shekere is slightly different African.

Through many years of oral transmission of the art of manufacture, and the way of playing it, also it was infected with the rhythms of the Greater Antilles.

The sounds of shekere

This musical instrument has different names (lilolo, chequeré, shekerere or axatse, among others). To play it is manipulated by moving and shaking their accounts to hit the surface like a maraca. It also hits the lower section with an open hand, to imitate the music of the hype.

A good shekere should be relatively loose beads, to achieve a stronger and fuller sound. Among the materials used in the accounts are pearls (small balls), with a special soft sound to a moderate pace, the big balls and shells to produce stronger, perfect with high-pitched instruments.

How shekere is made

Originally shekere became dry pumpkin leaving for several months. Once dry it is removed the seeds and pulp, it is cleaned and subsequently they added the beads and painted.

In Cuba even the instruments for religious rites are manufactured in this way, with hard, large seeds like the guayruru and soap stick, which manages a dry, high-intensity sound.

Currently the music industry factory creates shekeres of several  materials: plastic bodies, metal and even glass fiber; pearl beads, beads or shells among many others.

The form has also varied: depending on the convenience of the artist, some have been added, changed or texture handle to achieve a firm grip.

There are three types of shekere.

• Traditional are characterized as having a rounded head with a handle. They produce a crisp tone sound higher than other forms of shekere.

• The In Touch, these have an oval head and a large curved handles. They weigh half traditional.

• The Tube are cylindrical and long, its design facilitates faster movements to continue rapid pace.

In Cuba we have a particular way of playing the shekere, called “touch guiro”. The same kind of touch is used with other Afro-Cuban instruments and running with a trio box is divided into second and salidor, being respectively higher, medium and small.

Shaking in various ways to make pumpkin seeds from hitting and hitting the bottom of the instrument with the palm a sound that resembles the rest of the world is obtained. Irakere was one of the pioneering groups in this universal instrument.