The origin of AfroCuban percussion 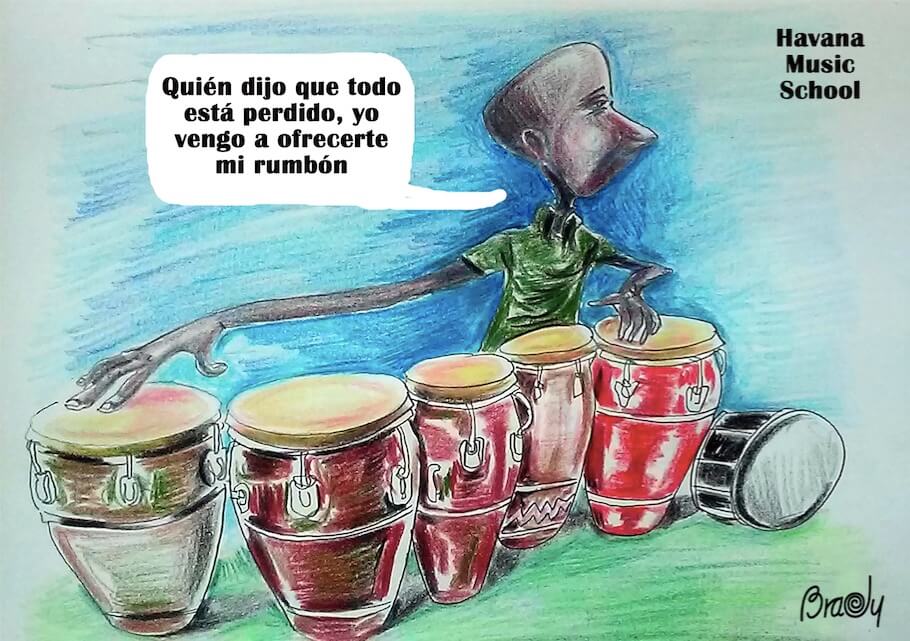 Percussion in Cuba, as we know it today, has its origins in the first African slaves residing on the island. With their arrival came also their sounds and rites and the need to communicate with their gods through music.

In this way the Cuban drums emerged, typical of the island for the national of its materials, and Cuban rhythms began to unite with those brought from Africa to form what we know today as Afro-Cuban music.

Percussion is based on a fairly large number of instruments. The claves, which guide the rhythms of the son and rumba of our country; the güiro, the shekere, the pailas, typically Cuban; the famous tumbadoras; the bongos, small drums that join in pairs and are used in popular music and the maracas, are some of the percussion typical Cuban instruments.

Cuba has always been characterised by its very specific rhythms and the fabulous mix of the most traditional sounds with the Africans. Percussion is the branch of Afro-Cuban music that stands out most internationally, and has had great exponents who have achieved fame in international settings of great renown.

Among the main Cuban percussionists are Tata Güines, legend of percussion of the island; Chano Pozo, one of the most recognized congueros outside of Cuba and Jose Luis Quintana Fuentes “Changuito”, one of the creators of the songo and professor of well-known musicians like Santana and Giovanni Hidalgo.

Mongo Santamaría is undoubtedly one of the most renowned Cuban percussionists. He was born in the neighborhood of Jesus Maria, in the Havana capital, and knew the drums thanks to the bembé touches to which he went with his grandmother. His specialty would be the bongó, with which he would debut in the Conjunto Bologna. His tour of the main orchestras and Cuban groups of his time led him to play in the Conjunto Matamoros and Legendaria Sonora Matancera and to share the stage with Benny Moré, legendary Cuban musician, Carlos Santana, Chick Corea and Tito Puente.

Dennys “Papacho” Savón is yet another of the most recognized Cuban percussionists today, along with Fernando Favier and Brenda Navarrete, winner of the first prize in the Cuba Drum Festival for his interpretation of the Batá drum.

Pedro Pablo Martínez Campos, Daniel López Cáceres and Marcelino Teherán are other main exponents of the Afro-Cuban percussion, together with the well-known group Los muñequitos de Matanzas in charge of maintaining the musical tradition of the Yoruba, Abakuá and Arara religions in our country.

A lot of stars, a single heart

From your origins to our days, nobody can deny the importance of the Afro-Cuban percussion as of playing of the Cuban. Like present-day example we can put the cajón, right now used at the new flamenco music but before in the religious ceremonies. It had to came from Peru to Spain for Paco De Lucía, and right after turn to Cuba.

The cajón flamenco comes across expert percussionists here, and the two rhythms could not make less than to mix. Nowadays, our country has many of better of this instrument, and they owe it to our Afro-Cuban roots.

Afro-Cuban percussion is part of the cultural roots of the island. It relates our history, the interweaving of two cultures so different and the birth of the Cuban rhythm that would come to mark our music ever since.

If you liked it, you can know more about Cuban music and its interpreters by subscribing to our page. In addition, we thank you for being part of the dissemination and promotion of these issues by sharing them through social networks.