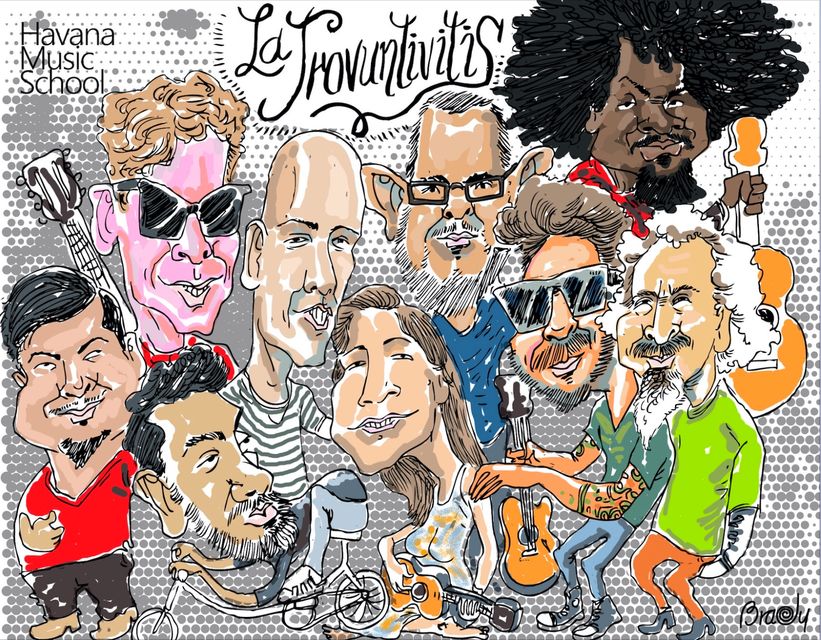 Many years ago, in the city of Santa Clara, a group of young people where looking for a place to show their love for Trova. In the summer of 1997 their dreams came true and today the Trovuntivitis is a reference of the Cuban Trova produced on the island.

The firsts to promote this genuinely Cuban space were the troubadours Alain Garrido, Leonardo García, Raul Marchena, Diego Gutierrez and the trio Enserie, of Roly Berrío, Raul Cabrera and Levis Aliaga. However, from the very beginning, this project received the support of the promoter Ramon Silverio, who welcomed them in the El Mejunje Cultural Center.

The weekly gathering of Trovuntivitis has worked from 1997 till today, making bridges between new and renounced troubadours. To the founders have had being adding names as Yaíma Orozco, Yunior Navarrete, Michel Portela, Irina González, Karel Fleites, Yordan Romero, Yatsel Rodriguez or Miguel de La Rosa, who have guaranteed that the project is steadily renewed.

Trovuntivitis is a atypical project and completely free: with no membership or template, as worked like similar efforts such as Habana Abierta or Interactivo. Thus, its members also work alone or make occasional ensembles, only in the name of good music Cuban. In addition to the songwriters, numerous instrumentalists have collaborated with Trovuntivitis.

Thus, the project draws the same of traditional Cuban Trova up to rock or pop, through son, boleros, Brazilian rhythms, flamingo, reggae and funk, rap, guaracha and folk music. The only limit is the public taste, in an effort to extend the trova horizons and brings it to contemporary.

This diversity of styles is the glue that keeps Trovuntivitis together, caring alike music and lyrics. The lyrics reflect the reality of the Cubans, mixed with lyricism due to lyrics of poets like Edelmis Anoceto, Yamil Diaz, Ricardo Riverón or Samuel Feijóo.

The Trovuntivitis in and out Santa Clara

The fame of this cultural project has exceeded the local borders, thanks to spaces as Verdadero Complot (Spanish American culture Center), A Guitarra Limpia and Puntal Alto (coordinated by the Pablo de la Torriente Brau Cultural Center) or La Casa de la Bombilla Verde. Thanks to them, lovers good Trova around the country have known the work of these artists.

In 2018 Trovuntivitis launched a disk with the same name of the project, compiling 25 songs of its members. It reflects the artistic work of more than two decades, co-produced by EGREM and the Rafael Prats Music Center of Villa Clara.

Along the past of time, project members have been presented in Switzerland, Algeria, France, Spain, Guatemala, Mexico, Cyprus, Bolivia, Chile, Colombia, Venezuela and Argentina scenarios. Trovuntivitis has received as collective awards like Pablo from the Pablo de la Torriente Brau Cultural Center and the 25 years distinction of the AHS.

If you want to help us spread good Cuban music, share this article in your social networks. And sign up for our portal to be informed of the work of the more talented Cuban musicians.