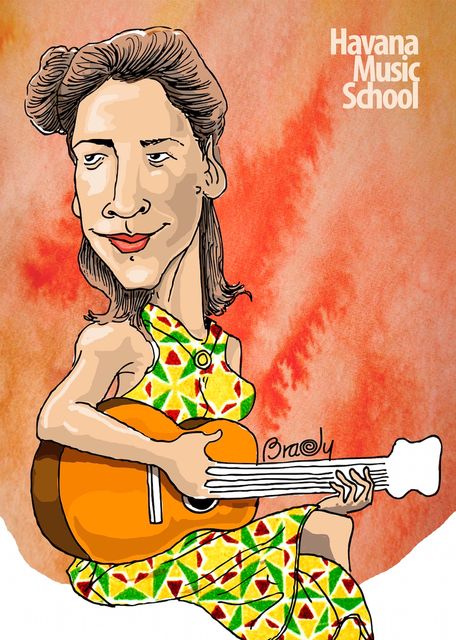 There is no doubt that if you ask about young voices of the Nueva Trova movement in Cuba, the name of Yaima Orozco will immediately be mentioned. Composer, singer and guitarist, she carries in her songs a mix of all traditional Cuban genres: son, bolero, danzón and guajira, integrated with contemporary pop rhythms.

Yaima Orozco is not only a popular voice among the national lovers of Trova, but also she have international acceptance. She has brought her music to countries such as Spain, Argentina and Switzerland.

I don’t think about those things

This says Yaima Orozco, referring to her little interest in media visibility about her person and work, in an interview granted at the beginning of 2018. Therefore, it is not surprising that there is little information regarding her origins. However, it is known that Yaima has a degree in Music Education and graduated from Singing at the Cultural Development Center of Villa Clara.

On her beginnings, she has declared to have had always concern for art. She was interested in everything beautiful that projected that expression and tried to be everything: dancer, announcer, theater actress, but finally ended up falling in love with the Nueva Trova. Silvio Rodríguez, Pablo Milanés and other voices of the Nueva Trova were the referents of her work, to which she incorporated her personal style.

Success has not stopped knocking at her door

Being a member of the Trovuntivitis project, Yaima Orozco identified herself from the beginning with the intention to bring the Nueva Trova anywhere in Cuba and abroad. Since 2006 she is a member of the Hermanos Saíz Association (AHS) and the Cuban Association of Musical Copyright Law (ACDAM). In later years, thanks to the quality of her work she becomes a member of UNEAC. She has also being part of the project to promote the songs of the book El diablo ilustrado, having interpreted the song “Como matar un fantasma”.

During 2009, 2011 and 2012 she played at the Spanish cities of Valencia, Madrid, Zaragoza, the Basque Country and Seville. In 2012 and 2018 she performed in Argentine and had the opportunity to take his music to Geneva, Switzerland.

In 2017 she organized together with Jordan Romero and Raúl Marchena the Longina Festival, which celebrated the twenty years of the event. In that same year her theme “Gracia” was nominated for the Lucas Awards in the categories of Best Video Trova, Best Video Artist Novel and Best Video in Visual Effects.

He has also collaborated in:

Now that you know more about the work of Yaima Orozco, help us give a greater promotion to her music, as well as other Cuban artists. Please subscribe to our portal and share this article on your social networks.