Carlos Alfonso – The soul of Sintesis 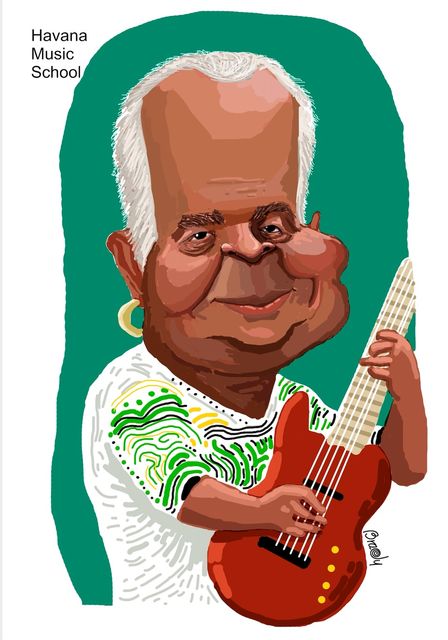 There are groups that define the musical history of a country. In this case we cannot talk about the Cuban music scene for the last forty years without mentioning the Síntesis group.

As its name shows, this band stands out for its work in the fusion of Afro-Cuban rhythms with the most modern airs of contemporary music, and much of that spirit of transformation and rescue is due to the talent of its director, Carlos Alfonso.

This musician of excellence was born in Havana on August 10, 1949.

As a child he began in music in a self-taught way on the guitar, studies that he completed at the Ignacio Cervantes School of Professional Improvement. Within his teachers are pedagogues of the stature of Federico Smith, Juan Elosegui, Leo Brouwer and Leopoldina Núñez.

Carlos was one of the composers who joined the Nueva Trova Movement early, founding the vocal quartet Tema 4 in 1972.

Four years later, together with Mike Porcel and José María Vitier, he joined the Síntesis group as a bass player and since 1979 he has been the director of this group, one of the longest-running and prestigious in the country and on the international arena.

Founder of a dynasty

In addition to being an excellent instrumentalist and singer, Carlos Alfonso is a prolific composer. The vast majority of his more than 150 recorded works are reflected in the 13 recordings of Síntesis, the group to which he has dedicated a large part of his life. However, his music has reached other spheres of Cuban culture.

Carlos has composed for works staged by Danza Nacional de Cuba, the National Ballet of Cuba and the National Folk Ensemble. He has also worked on the soundtrack of works for television and cinema, such as “Bras-Cuba” by Santiago Alvarez (1981), “Obateleo” by Humberto Solás (1988), “María Antonia” by Sergio Giral (1990) and “Miel para Ochún” by Humberto Solás (2001).

All the talent and effort of this great musician has not gone unnoticed. For his career, Carlos Alfonso has received the following distinctions:

• Diploma of Artistic Merit from the Higher Institute of Art

• Diploma of Artistic Merit from the National Museum of Music

But his greatest achievement will undoubtedly be the permanence of Síntesis in popular taste for so long, revitalized by the participation in the band of two of his sons with singer Ele Valdés: Eme and X Alfonso. Together, the Alfonso-Valdés family has been able to earn a space in Cuban cultural history on its own merit.

In the words of Carlos Alfonso himself, about the popularity and long career of his band: “My thesis has always been that there is a great interrelation between Afro-Cuban music, jazz and rock… all rock drumming is based on the African music, but translated in another way, logically transculturated».

If you want to know more about Cuban music, don’t forget to subscribe to our portal and help us promote good music by sharing this article on your social networks.