Sintesis: more than a music band – An institution 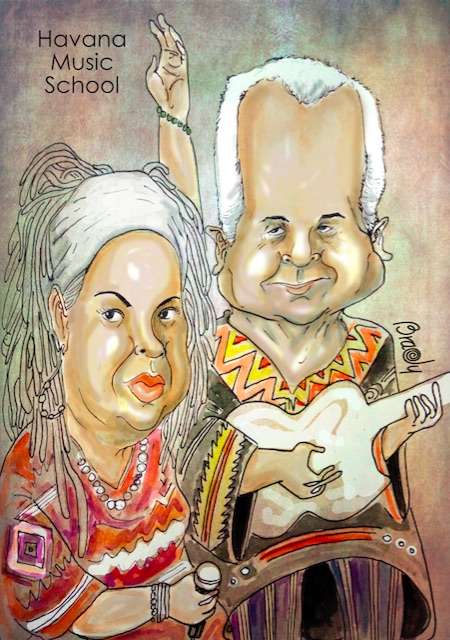 One of the most popular and well-known musical groups within the Cuban musical horizon is Sintesis group.

Their bases are in the quartet Tema VI, founded by Carlos Alfonso Valdes (guitarist and director) in 1974. Its first members were Silvia Acea, Ele Valdés and Eliseo Pino on vocals; Fernando Calveiro on guitar; Enrique Lafuente on bass and Francisco Padilla on drums.

In 1976, as a means of opening the fingerboard of rings, the bands joins Mike Porcel, forming a vocal-instrumental, group mounted on the guitar, bass, keyboards and the purest Cuban percussion. Later in 1982 Lucia Huego joins the band, she would be very important in the work of the group during the following years.

Sintesis overhangs a unique style that integrates disparate sources of Cuban music, especially African rhythms with more international court styles such as jazz, pop and rock. This creates a fusion of broad expressive possibilities associated with its large capacity for experimentation, defines music synthesis. Lately the group has also added to its creative repertoire new sounds of hip-hop and techno.

Sintesis carries the Cuban fusion music around the world

The 90s were particularly significant for the group, because apart from recording several albums, they participated in several events that launched them into the international music scene. Thus, Síntesis was presented at the Club Ash Grove, Los Angeles; the Montreaux Jazz Festival, in Switzerland; the Nice Jazz Festival and Jazz a Vienne in France; the North Sea Jazz, the Netherlands and the Jazz Pori, in Finland.

These opportunities opened international musical path of the group. These are not the only occasions when Sintesis has made international appearances. They have toured in Mexico, Argentina, Venezuela and Puerto Rico.

They have also dominated the stage of Rock in Rio Festival, where they sang along to essential groups and personalities from the world of rock and pop as Oasis, Sting, Iron Maiden, Britney Spears, Guns N ‘Roses and others. A long list of concerts add the Havana Film Festival of New York; Festival Jazz Plaza in Havana; the Cervantino Festival of Mexico, and the Planet Mestizo in Spain and many other famous events.

During their career they have shared the stage with other unforgettable music of all time as Wynton Marsalis, Ray Barreto, Maceo Parker, Fito Paez, Ray Lema, Khaled, Tris Imboden, Jimmy Earl and others.

A crucible of Cuban music

There are several artist that have also belonged to Sintesis at any stage or have been presented with them at different stages. Artists like Amaury Pérez, Jose María Vitier, Gonzalito Rubalcaba, Ernán López-Nussa, Pablo Menendez and X Alfonso, son of Carlos Alfonso, who still continues to work with Sintesis synchronizing with his solo career. Sintesis group currently consists of Carlos Alfonso (director, bass, composer and singer), Ele Valdés (keyboards and vocals), Esteban Puebla (orchestrator, piano, keyboards and composer), Eme Alfonso (vocals and keyboards); Michael Olivera (drums and percussion) and Andrei Garcia (guitar).