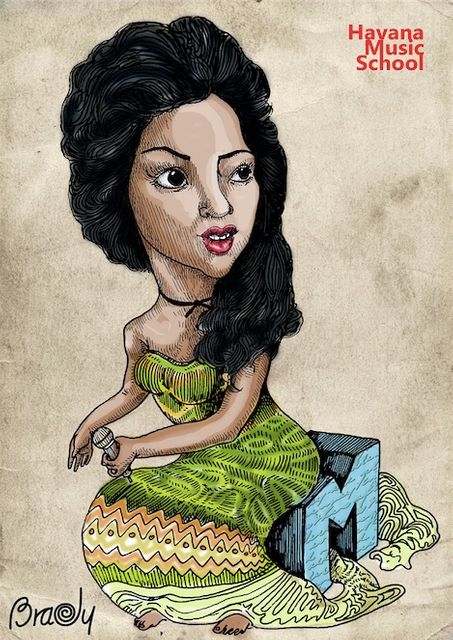 In Cuban music the name Alfonso means one of the families with most historical and musical work on the island. The foundation of Síntesis in the 70´s would open the way to the so-called Cuban fusion.

All characterized by his prodigious talent, Eme Alfonso stand up for his vocal ability and the creation of a unique and appealing rhythm.

Eme Alfonso, whose real name is Madonna, was born in Havana on 25th of February 1986. Daughter of Carlos Alfonso and Ele Valdés, founders of the famous Síntesis group, the small Eme grew up in a music-filled atmosphere. Their studies begin at an early age (7 years) at the Alejandro Garcia Caturla Conservatory. She graduates in the specialties of piano and choral conducting. In 2001 she joined the National School of Arts (ENA), where she graduated in 2005 also in choral conducting.

The young Eme Alfonso is linked to early age with Síntesis, that leads her to share the stage with greats of Cuban music like Chucho Valdes and Pablo Milanes. Habana a flor de piel, recorded with this group, won a Latin Grammy nomination in 2002. Her first solo recording was made in the third volume of the Ancestros de Síntesis, CD which reached several Cubadisco awards in 2003. Since that moment, her songwriting and mixing different rhythms have earned the recognition of national and international public.

A merge to remember

Eme Alfonso is considered one of the great promises of Latin soul of the moment. Her first solo album Señales, launched in 2008, won the Cubadisco award for best fusion album. The striking blend of jazz, funk, soul and traditional Cuban rhythms, with a surprising handling voice, placed the artist in the international spotlight.

With an indefinable rhythm that have roots as deep as the Cuban sounds and influences of the most prominent international music, Eme Alfonso has shared the stage with artists like Chucho Valdes, Fito Paez, Silvio Rodriguez, Omara Portuondo and the renowned band Cool and the Gang.

In 2001 she toured North America and presented in the SOB’s in New York. In addition, she has performed in Latin America and Europe. In 2012 launched her album Eme in which collaborates with her brother X Alfonso, one of the most outstanding Cuban musicians today; Pedro Luis Ferrer, Diana Fuentes, the singular pianist Harold López Nussa and Ruzzo of the Orishas.

This album achieves a magical fusion of R & B, jazz and experimental pop as well as son and the well known Cuban Filin. Her musical career is steadily rising, thanks to the masterful ability to Eme Alfonso to rediscover and transformed. Eme has participated in international events such as the Jazz Festival of Tropea (1998), Grand Performens Festival (2000), The Feast of Music (2001), Jazz in Nice (2006), Tom Fest (2008), among many others.