Come with us to the Submarino Amarillo 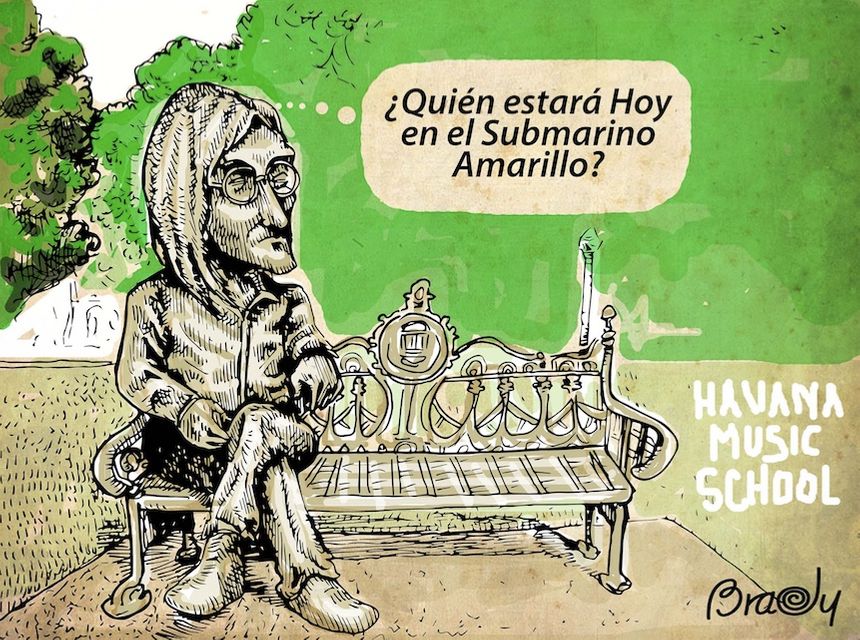 The Submarino Amarillo (Yellow Submarine) has become a milestone in Havana’s cultural world since its founding on March 10th, 2011.

Located on 17th Street and 6, (Vedado neighborhood), just in front of the bronze statue of the unforgettable John Lennon, this club pays deserved tribute to the famous British band The Beatles.

Huge yellow doors and small boat hatches, welcome us to this mythical place. Upon entering, the overwhelming wave of good music and intimate space that is the Submarino Amarillo hit us. Each element of the decoration is related to the music of the four of Liverpool: from photos of each of their albums, fragments of their most famous songs and drawings of giant strawberries and blue men.

The feeling of being transported to another universe is increased by the sound of the best of international music from the 50s, 60s and 70s. The Rolling Stones, Deep Purple, Queen, AC / DC, The Who and Jimi Hendrix are just part of the huge list of groups that resonate in every night of the Submarino Amarillo. The crown jewel: The Beatles, that with Yellow Submarine announces that the band is about to start playing.

All together for Abbey Road

Among the major attractions of this club is the possibility to listen, live, some of the best Cuban bands in rock and roll covers. Los Tacson and Los Kent, that comes dazzling with versions for years, have joined recent projects like Miel con Limón, Sweet Lizzy Proyect, Luz Verde and many other bands that give tribute to the best of English rock. On the lips of the hypnotist Grettel Barreiro, the virtuous Luna Manzanares or unique guitar of Ernesto Blanco, every night at the Submarino Amarillo is a different experience.

In quilted puff on the back of the room or sitting at the tables near the stage, we found the old school rockers, nostalgic die-hard of a time that now seems closer than years ago, between gulps and songs. But also, jumping between chairs or singing at full voice, a younger generation joins the euphoria that still cause the Beatles. A heterogeneous audience, that is a sign that the classics never die and the need for places like this that keeps the memories alive.

The Submarino Amarillo, in tune with the famous animated inspired by the song, receive us today, ready to let ourselves sink into the blue spilling its walls. It opens in the evenings, with a refreshing matinee and in the dark Havana nights. The fans of rock and roll can find here one of the few roads on the island that does indeed cross the universe.

If you want your friends to know this great place, share this article on your social networks. And if you’ve found love, fun or nostalgia aboard the Submarino Amarillo, leave us a comment.