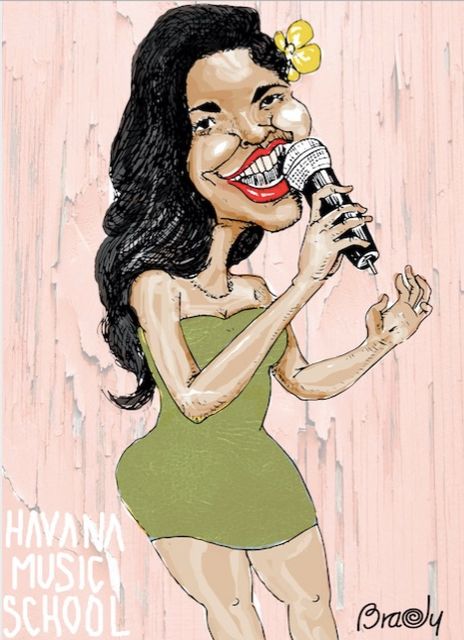 There are people who come into this world with a gift that marks their destiny. This may well be the case of Luna Manzanares, a young Cuban endowed with a beautiful voice and an innate musical talent. Possessing a wide vocal range, alongside with a variety of musical influences, she may fly freely between disparate genres from jazz to trova, from Brazilian music to African.

A jewel of Cuban Jazz is born

Despite being rejected by a music school, Luna Manzanares never gave up his dream and at the age of 10 years, entered the Vocational School of Art Paulita Concepcion; where began his artistic training in the specialty of Choral Chant.

In 2005, have been completing the elementary level, she entered the Amadeo Roldan Conservatory, specializing in Theoretical subjects. During her second year, came the great springboard for her career, with a place in the Competition of Young Jazz Musicians, JoJazz.

There, a 16 years old Luna Manzanares, got the First Mention in the category of Interpretation. This was the beginning of a dizzying career on the rise, starting with the project Los Primos, from the cultural exchange between Cuba and Canada. Through this partnership Luna was able to perform several concerts in Canada, including a presentation at the Halifax Jazz Festival.

Her academic training was completed in 2009. In addition to the knowledge received at the Havana Conservatory, she also passed several courses in the United States and England. This, added to her early experience in English-speaking scenarios, gave her an exquisite mastery in that language.

Since 2009, Luna Manzanares becomes a member of the Haydée Milanes band and the Jazz Band of the maestro Joaquin Betancourt, working simultaneously with both groups for several years. In addition, Luna had collaborated with other young Cuban jazz players such as Michel Herrera and Emir Santa Cruz.

In 2010 she joined to an Indian Tour with the project Young Cuban All Stars, leaded by Ernesto Camilo Vega. The tour was considered a success and had good reviews in the country. She also enters the Hermanos Saiz Association, working with several troubadours, as Inti Santana and Pedro Beritan. In 2011 she joined briefly the prestigious Schola Cantorum Coralina.

A year later she launches her solo career, starting with the success that reached the song Tanta soledad. She formed his own band and works on her first album under the EGREM label, with Descemer Bueno as producer.

The spirit of the Beatles

A separate mention in the Luna Manzanares career deserves The spirit of The Beatles. In this project, conceived by the producer Enrique Carballea, Luna works with the pianist Alejandro Falcon. Together, they have created a very personal way of interpreting the music of the Fab Four, shifting to the Jazz.

They perform concerts from their “headquarters” the Submarino Amarillo, to the concert hall of the Museum of Fine Arts. This project not only revisits Beatles hits, but also other English-speaking artists to the delight of the Cuban public as Aretha Franklin, Adele, Tina Turner and Donna Summer. All from the magic that gives the Jazz.

And, will there be something that the voice of Luna Manzanares cannot achieve? Leave us a comment with your opinion and share this article in your social networks, so your friends know not a star, but this big moon of Cuban music.