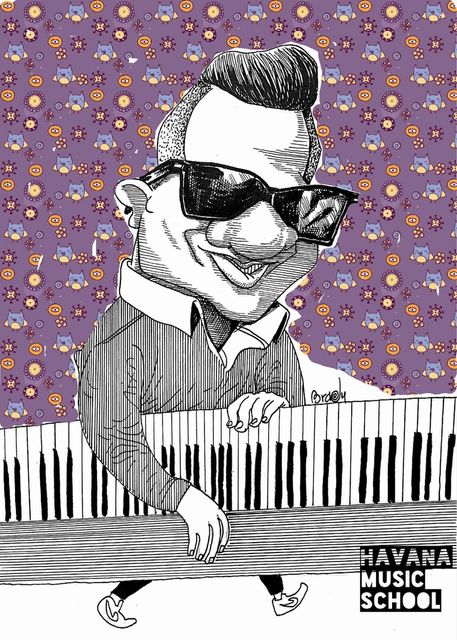 The family of the child Maykel Blanco, born on January 21st, 1982 in Havana, had nothing to do with music, except that his parents were very good dancers of popular music.

But since childhood, Maykel liked to listen to radio programs with Cuban music. Very soon he began to sing, dance and imitate fashion artists both in school activities and in the neighborhood for their neighbors.

Also at that time he began to experiment with boxes, ladles and other objects looking for the sounds of percussion.

At 12, this restless teenager begins his musical studies at the Geraldo Guanche night school and later at the Amadeo Roldán Conservatory. In addition to percussion he learned to play the piano and with only 15 years he was part of the movement of amateur artists where he was very successful. At that time he worked with several groups, such as La Constelación, Abel y La Seducción or La Ascensión, as a pianist, vocal chorus and arranger.

With 18 years he founded his own orchestra, La Suprema Ley, in the city of Matanzas, and with it he recorded with the record label Envy of Spain his album Ya llegaron los Cubanos. In the tracks of this album you can see the influence of rhythms such as timba and rumba in their arrangements.

Maykel is recognized as heir to the work done by Juan Carlos Alfonso, pianist and orchestrator, when he was part of the Revé Orchestra, as well as Juan Formell and the Van Van.

In 2004, Maykel Blanco and the athlete Javier Sotomayor make an artistic alliance and thus the musician begins to lead the Salsa Mayor group. It is at that moment that the percussionist has the opportunity to look for his own sound and develop his talent and energies based on the dance music he wanted to create.

This group has managed to reach the highest places of preference within the public of Cuba and the world. For some, it has earned the qualifier of “The Musical Machine of Cuba”. Salsa Mayor has 14 members, most of them with a musical academic background.

Percussion instruments abound in its formation: congas, drums, bongo, guiro and bell. They also have a keyboard and electropads and 2 trumpets and trombones. In their studio musical recordings they also use flute and violin. The orchestra has made multiple international tours on stages in the United States, Europe and Latin America.

Maykel Blanco and his Salsa Mayor have recorded several albums:

In its years of activity, this band has won several awards that prove its quality:

So you know: if you want to know more about Cuba and its artists, subscribe to our website. And help us promote good Cuban music by sharing this article on your social networks.