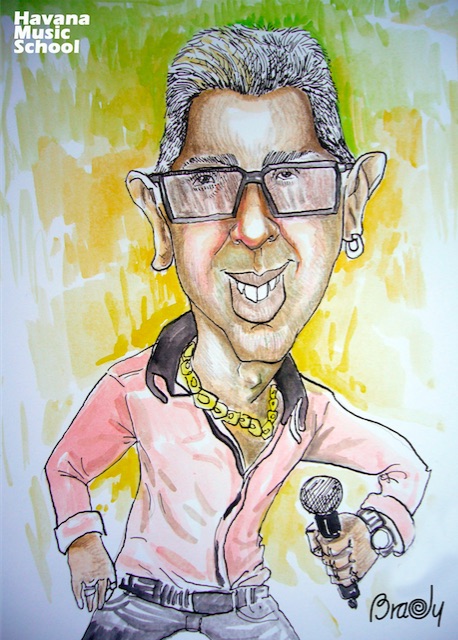 Paulo Fernández Gallo or Paulo FG (his stage name), does not want to digress in metaphors because he considers direct language to be more practical for dance music and that the public receives it better. He has been known as a good singer, composer of almost all the songs that he plays and defender of the Cuban roots in all its manifestations.

Before being Paulo FG

Born in Buena Vista (1962), he is inspired by Benny Moré, Juan Formell and Pacho Alonso, but recognizes that his talent was inherited from his mother (pianist and poet), who taught him vocal lines, harmony, melody and bass.

His great opportunity comes when Adalberto Alvarez discovers and recruits him when he knows his passion for singing. He becomes one of the vocalists of the orchestra Adalberto Álvarez and his son. In 1991, he joined Opus 13, and it was when he met, fortunately, Juan Ceruto, who would be his music director and arranger during the 90’s. In 1992 he decided to form his own band: La Élite.

Paulo FG and his elite form an artistic project where excellent musicians meet with the desire to achieve new sounds and personalities of their own. It is considered by the specialized critics as one of the innovators of the Cuban timba (introduces the intelligent use of the bass guitar, and the choirs and tumbaos with two or four keys of duration).

In his presentations he improvises constantly, changes the sonorities as a real specialist, interacts with the crowd and reinterprets his own lyrics. Its great muse is the life, the Cuban of the street, the world that surrounds it and the popular poetry. Respect his public admiration and welcomes it in each presentation.

• Tú no me calculas (1993). Simultaneous release in Havana and Tokyo.

• El bueno soy yo (1996). It deserves the EGREM awards: Dance Music and Disc of Popularity.

• Con la conciencia tranquila (1997). It is considered his masterpiece and the best of all the timba genre.

• Sin etiqueta (2010). Cuban timba prevails and accompanies it with other genres.

He has appeared with his group in stages around the world: United States, Peru, Colombia, Holland, Belgium, Japan, and has shared stage with famous artists like Johnny Rivera and Isidro Infante.

For many critics it is a revelation, for its audience the most popular, for itself an uncompromising film viewer and lover of jazz. And, above all, a music lover.

And not to be bored, was the protagonist of the movie “Vuelos Prohibidos” of the Cuban director Rigoberto López and is promoter of the project “Sonando en Cuba” for the search of new talents.

Paulo FG or Paulito FG is undoubtedly a fascinating artist and one of the most phenomenal musicians of the last decades.