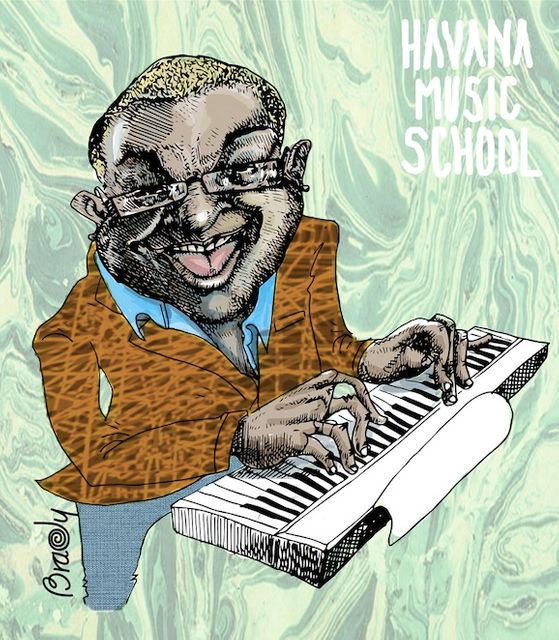 When we speak about Cuban popular music, it should be mentioned without any hesitation “Puppy Pedroso y Los que son son.

César Puppy Pedroso as a pianist, composer and arranger, has made his mark as a founder member of Los Van Van, part of the Orquesta Reve and director of his own band. Together with the percussionist Luis Quintana “Changuito”, Puppy is recognized as one of the architects of Songo, which was gestated within Los Van Van in the 1970s.

Puppy has deep musical roots. He comes from a family of great music traditions: his grandfather, Julio Pedroso; his father, César “Nene” Pedroso; and his uncle, known as Pío Escaparate. At 12 years old, he entered the Amadeo Roldan Conservatory, where he would begin his training as a pianist.

Later he receives lessons from Ignacio Villa, the renowned Bola de Nieve. His first experiences in bands came from the hand of his father, who used to send him as a his substitute. So it remained until 1964, when he joined the group Fascinación. With this band he played for a couple of years, until Elio Revé invites him to join his orchestra. He became musical director of the Orchestra Revé. In 1969, he meets the immortal Juan Formell.

The years with Los Van Van

Puppy Pedroso was at the forefront when in 1969 the maestro Juan Formell founded Los Van Van. With this major band Puppy plays for three decades as pianist, arranger and composer. His work includes 19 albums with the band, for which he composed hits like Tumba y Timba, El Negro está cocinando, El buena gente, Hoy se cumplen seis semanas, Disco Azúcar among others. In 1999, Puppy releases his last work with Los Van Van before starting his own band career. The album, titled Llego Van Van, won a Latin Grammy in 2000 for Best Salsa Album.

In the same year, Puppy finally decides to go solo, following his desire to compose new material outside the Van Van trade mark. Since its inception, the new project Puppy y los que son son enjoyed great popularity. However, there was always the doubt whether this initial success was because most of the band songs had already been popularized by Los Van Van.

This doubt was dispelled in 2001 when the CD Los que son son was released, conformed only with Puppy´s original and unreleased tracks. The name of the album and the band reflects both a tribute to the rhythm and an indication that all the band musicians are all-stars at the son.

Since then, the music of Puppy Pedroso y los que son son had reinvented the timba and put to dance Cubans and people from around the world. Without question, they have become ambassadors of Cuban culture around the globe.

Since then, If you liked this article, share it with your friends. And leave us a comment regarding the music of this Cuban master.