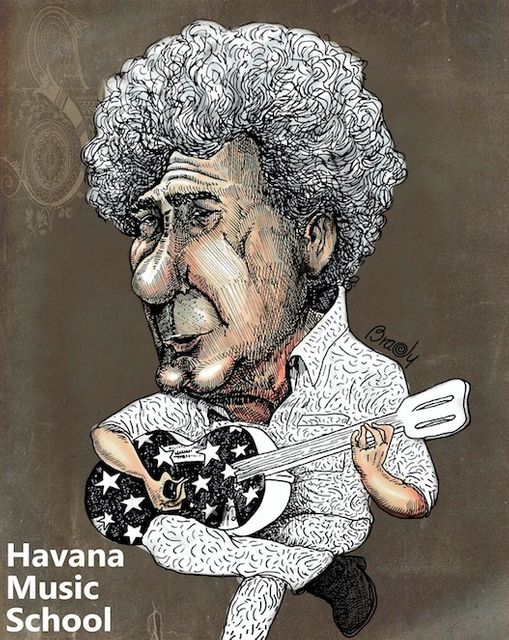 Cuban music creation has enjoyed great artists in each of its rhythms. Within the composition for orchestra and guitar mastership stands Sergio Vitier, musician and intellectual. The recent death of this remarkable figure represents a great loss to the national culture.

Sergio Vitier was born on January 18th in 1948 in Havana. Firstborn of two of the most famous literary figures of the national culture, Fina García Marruz and Cintio Vitier, was not a surprised when at early age showed a fondness for music.

His early years were developed between his home in the capital and the El Empalme ranch, where he learned to ride horses, a passion that would keep all his life. The passage of the harmonic, with which he took his first notes, to the conga was thanks to the influence of a rumbero neighbor who aroused interest in the instrument. His first group, with just 13 years Los chicos del Jazz was made up by Amadito Valdes and Rembert Egües.

At this time he began studying guitar and at age of 15 gave a concert in the current House of Culture of Plaza. Here he met Elias Barreiro who recommended a more serious study of the instrument. Isaac Nicola at the Amadeo Roldan´s conservatory, would teach the main techniques and study habits that would keep throughout his life.

His entrance in the stage and Cuban culture

The family dynamics that lived Sergio Vitier allowed him to rub shoulders with the leading figures of national culture. Samuel Feijoo, Lezama Lima and Eliseo Diego are just some of the top names that make up this list. Such relationships were vital to the development of a valuable intellectual thought and the formation of a strong personality that excel in each of their pieces.

Training with his maternal uncle Felipe Dulzaides, renowned pianist and jazz musician, not only prepared him in handling the instrument but opens the door to valuable opportunities. During a presentation with Dulzaides, Manuel Duchesne and Armando Romeu asked him to join the Modern Music Orchestra.

Considered one of the best jazz bands in the world at the time, the group had Chucho Valdes on the piano and Arturo Sandoval on the trumpet. His musical journey led him to share the stage with Miriam Acevedo in El Gato Tuerto, as well as part of the Protest Song movement in 1967. In 1968 he graduated from his guitar studies at the Amadeo Roldan and starts giving solo concerts.

The cinema in the work of Sergio Vitier

One of his most famous works was the soundtrack of En silencio ha tenido que ser, which he shared with his brother Jose Maria Vitier, also a recognized figure in the Cuban music scene. The brothers also shared in the ballet Ad Libitum in 1978, with the figures of Antonio Gades and Alicia Alonso. His great talent led him to earn the National Music Prize in 2014 with Leonardo Acosta. On several occasions, he was recognized for his musical productions: EGREM prize in 1997 for his album Homenaje, the Cubadisco 2000 for Travesía and the Cubadisco Grand Prix 2001 by Nuestra Canción.