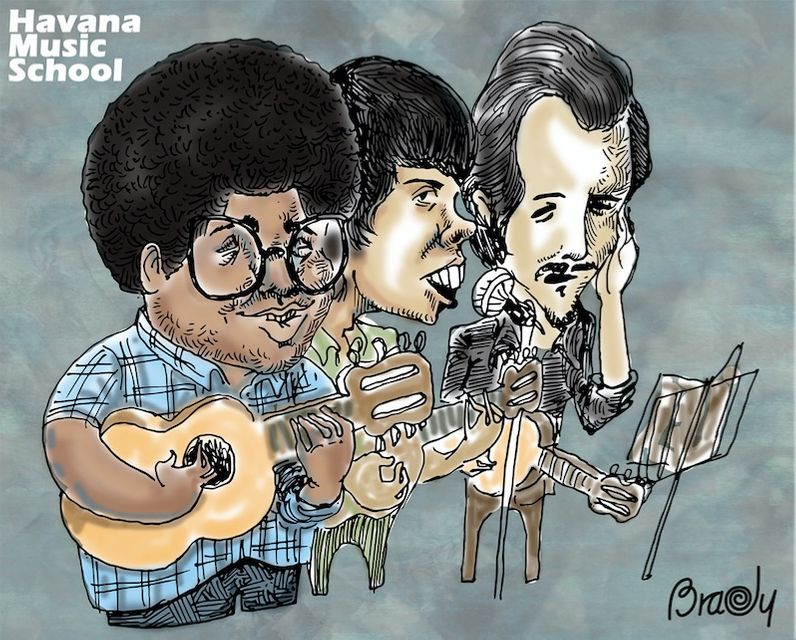 Few people have reached the top on their own.

Finding and sharing with those whom we have common ideas and interests not only is comforting, but also enriches. Art thanks these associations and the history of music, visual arts and literature is full of groups and schools for which the exchange was crucial and from we owe monumental pieces.

Fortune smiled with this lucky young people who in 1969 decided to join with the idea of modernizing the Cuban music. Silvio Rodriguez, Pablo Milanes, Noel Nicola and Leo Brouwer are just some of those who made up the so-called Grupo de Experimentación Sonora del ICAIC. As usual, this alliance exceeded its initial target, because not only gave new life to the music of the island, but served germ of a movement that would revolutionize the Latin American song: La Nueva Trova.

Designed by Alfredo Guevara, the group was formed in 1969, after he attended a concert of Brazilian music that showed novel sounds obtained by combining traditional music with more modern tunes. Thus, after a thorough study of the musical roots of Cuba, these could be merged with jazz, rock and even happening to have innovative rhythms.
In his capacity as director of the ICAIC, Guevara claimed that these experiments will be used as the soundtrack of the new film. But the results exceeded their expectations.

Grupo de Experimentación Sonora del ICAIC is a clear example of the importance of music education in Cuba and especially Havana, authentic music school. It was combined with learning the artistic work.

The first two concerts were called GESI Granma and Cuba-Brazil respectively. In addition to making the dreams of these young people, they served to give them a voice within the Cuban cultural context. Back then he breathed confidence and enthusiasm in justice and freedom seldom have again become so strong.

Actually, learning was not only musical. The school group was also of “humanity” for them. The emblematic “Cuba va” (which also speaks of his faith in the future) was written by Silvio, Pablo and Noel and played by the guitar of Pablo Menendez and Eduardo’s bass made of lace phones and other dishes Leoginaldo drums. The GESI taught these young people to be detached and simple and to understand that the most important thing was that the ties were established between them.

The Grupo de Experimentación Sonora del ICAIC was dissolved in 1976 but his mark was essential. In addition to the experimental advances that would serve as a precedent for the Nueva Trova, the GESI, as Guevara had dreamed, performed the music of several films.

Among them are “Los pinos nuevos” (The new pines) music by Emiliano Salvador and GESI, “Vanguardia en la isla” (Vanguardia on the island) by Pablo Milanes and “El signo de estos tiempos” (The sign of these times) by Emiliano also in collaboration with the group.