Noel Nicola – The “quiet” of the Nueva Trova 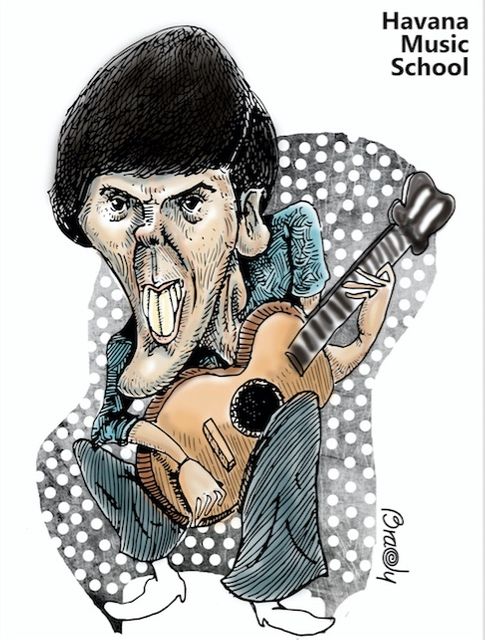 It is not possible to speak of the denominated Song of Author, Trova, New Trova or Protest Song without naming Noel Nicola.

Along with singers as renowned as Pablo Milanés, Vicente Feliú and Silvio Rodríguez, a voice and a guitar rose in the figure of Noel Nicola, author of essential songs of Cuban music.

Noel Jorge Nicola Reyes, nicknamed “the quiet of the New Trova”, was born on October 7th, 1946 in the bosom of a family of musicians. His father was a teacher of the Cuban School of Guitar and his mother an outstanding violinist. Therefore, his first contacts with the music were “within the family”.

He learns like many troubadours as self-thought, and accompanies his texts with the guitar. His talent for poetry, melody and music were totally innate.

At the age of 13 Noel composed songs and performed at amateur festivals as a member of several musical groups: Los Kendy and Six TK. At that time, he had a repertoire consisting mainly of fashionable songs (Fausto Papetti, Charles Aznavour, The Beatles and traditional Cuban music).

The House of the Americas in Havana – emblematic place of the arts and the letters in Cuba -, received Noel Nicola in 1968 to offer its first recital, and the following year joins to the ICAIC´s Group of Sound Experimentation. From 1972 until 1977, he became the first director of the New Trova Movement.

Between 1972 and 1980 his work did not stop. He toured the Dominican Republic, Mexico, Spain, Nicaragua, Venezuela, the Soviet Union, France and the United States.

Noel Nicola‘s songs are characterized by tackling bitter satire against bureaucracy, social conventions, hypocrisy in the relationship of the sexes and cursilery. But also meditates on old age, love and death.

His works have been interpreted by troubadours and singers of the stature of Joan Manuel Serrat, Daniel Viglietti, Guadalupe Pineda, Issac Delgado, Sonia Silvestre and Xiomara Laugart.

As a member of the ICAIC Sound Experimentation Group

• The man of Maisinicú (1975): Theme of a classic of the Cuban cinema. The film narrates the fight against the bandits in the hills of Escambray.

His songs at present

Noel Nicola died in the 2005 victim of cancer, with only 59 years of age. However, the poet and the human being remains in the hearts of those who bet on a committed and liberating music. His compositions are timeless and rise like victory songs.