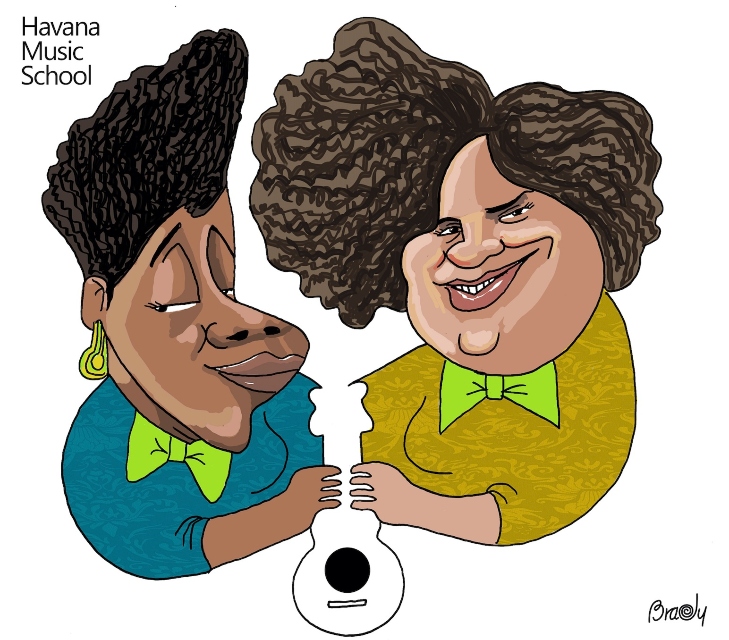 Born as a duo, Jade is much more than the union of Yanaysa and Maygred. They are not afraid to incorporate other musicians into their format, if the goal is to enrich their repertoire with strong influences from Brazilian sounds, blues, elements of jazz, pop, funk and milonga, skilfully mixed with traditional trova.

Also, because of the personal seal of the filling, the tuning of the voices of these singers and their passion for cultivating Cuban music from an alternative point of view, there is no doubt that they are one of the most interesting bands of the last decades in the Havana scene.

Founded in Havana in 2005, the Jade Duo is made up of Yanaysa Prieto Pedroso (composer and first voice) and Maygred F. Bourricaudy Blanco (guitarist and second voice), both members of the UNEAC.

Yanaysa was born in Havana in 1976, and studied teaching in the Specialty of Music at the Enrique José Varona Pedagogical Institute. Then she did the Guitar and Singing Specialty at the Félix Varela y Morales Center for Artistic and Professional Improvement in Havana.

Maygred, also from Havana, was born in 1983 and graduated from the Intermediate Level in the Classical Guitar Specialty, also at the Félix Varela y Morales Center for Artistic and Professional Improvement. She was the founder of the traditional Cuban music septet Miel de Ochún and served as a guitarist in several projects such as the La Campana septet and the Son de Almendra quintet.

In short, it was important for Cuban music that both coincided in the House of Culture in Old Havana and decided to create the Duo Jade. Together, they began a successful career in 2005 in the space La caja de nada, together with the poet Sinecio Verdecia.

The group has improved a lot since then, and the quality of their proposal has made them share the stage with national music personalities such as Marta Gómez, Liuba María Hevia, Silvio Rodríguez, Yusa, Gema Corredera, Lucía Huergo, Marta Campos, Rey Ugarte, Cesar Lopez or Ivette Cepeda.

In Cuba we have had the opportunity to enjoy his art in spaces such as the FAC (Fabrica de Arte Cubano), the Theater of the National Museum of Fine Arts, the Pablo de la Torriente Brau Center or Casa de las Américas. However, his usual space from 2013 to 2017 was the Gardens of the Mella Theater and the Yellow Patio in Old Havana.

In the international arena, they have performed at the Daba Daba room and the Altxerri Jazz Club in San Sebastián, Spain; in addition to the University of Baiona and the Elkartetxean Cultural Center in Maule, France.

Other festival performances include 2017 AM-PM International Event; the Madrid Pride Festival in Spain and the Musique et Révolution tour that included performances in Geneva, Lausanne, Vevey, Annecy, Switzerland and France. The Jade Duo was also included in the Creative Music Residencies Project in Belo Horizonte, Brazil, and the Multimusikala Event, in Spain.

With songs that speak to us of hope, friendship, love, tolerance and poetry, the Jade duo transports us to a universe of almost spiritual serenity that inspires us to live. Without a doubt, they have a well-deserved place on our playlist.

If you want to know more about this group and others that make up that great melting pot called Cubanía, don’t forget to subscribe to our portal. Help us promote good music by sharing this article on your social networks.