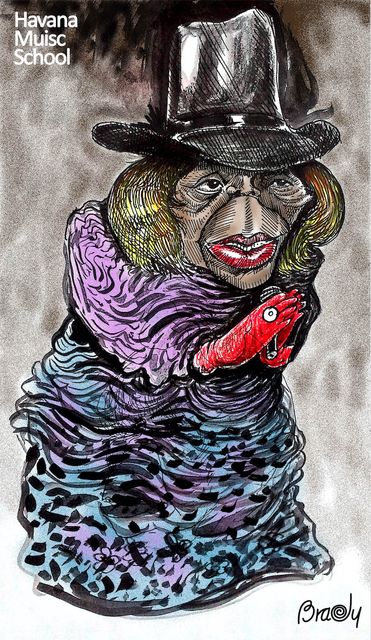 As Juana Bacallao says “I can not go out on the street because the people adore me” and “this ugly face was sent by God to Earth to amuse people.” And there is no person who refers to Juana Bacallao without a smile.

From Neris Amelia to Juana Bacallao

Neris Amelia Martínez Salazar was born on May 26th, 1925 in the Havana neighborhood of “Cayo Hueso”. Her father, very poor, dies when the girl was only 6 years old, and she was interned in a school of nuns. She had no resources, but at that time she played piano and tumbadora.

One day, while singing and cleaning the stairs of a house where she worked as a maid, she was discovered by Obdulio Morales. And so, that young woman without culture, presented herself to an audition at the Martí Theater (cradle of vernacular art), becoming forever Juana Bacallao.

It debuts with a guaracha called “I am Juana Bacallao” where the lyric said:

I am Juana Bacallao/
I am Juanita Bacallao/
The black one in the bembé/
Splashes to not wet.

And such was the success that reached, that began to act with emblematic figures like Rita Montaner, Candita Quintana and Alicia Rico.

Since the release of that song, Neris lost her name and changed it to Juana Bacallao or Juana la cubana. Despite her indisputable success, she could not get rid of discrimination and misunderstandings: she was considered vulgar, mean and inappropriate for television, radio, records or big theaters.

She was relegated to nightclubs of low category, where the public’s hostility forced her to create a way of expression that served as a defensive weapon. But the talent always wins and her moment also came.

Stars only go out at night

The striking and outlandish costumes, her wigs, her steep heels, her long earrings and silver boots have always been with her. Little by little he became indispensable in Havana’s most famous cabarets such as “Tropicana”, “Copa Room” and “Parisien”, sharing stage with Benny Moré, Bola de Nieve, Meme Solis, Nat King Cole, Omara Portuondo and Elena Burke.

This unusual style has also led to France (Opera-Comique de Paris), Spain, Mexico, Venezuela and the United States where she met Michael Jackson in Las Vegas. And in Cuba, the famous singer Beyoncé expressed her admiration and respect during her visit to the island.

The most incredible thing is that Juana Bacallao, Juana la cubana or Juana la caliente, is a diva who does not know how to dance, does not learn the scripts, improvises all the time, does what she wants on stage, is extravagant, sings what It seems and defers all the time.

But, unquestionably, her popular grace, her unique charisma, her authenticity and cubanity come together to achieve a unique and special atmosphere. The public accepts her as she is, claims her, admires her and crowds the places where she presents.

During his artistic life she has been recognized with various awards: Distinction for National Culture, Alejo Carpentier Medal and Gold Record in Canada.

Juana Bacallao is and will continue to be The Black Goddess of Cuban cabarets.